Zombies (also called Undead[1] or Living Dead) are corpses that are re-animated by magic or some other supernatural or paranormal force. And although not alive, they behave as if they are. A typical zombie walks around as if in a trance and very rarely can speak verbally. Most would just make growling noises if anything. Some have been known to feed on human flesh, while others have been seen to be far less ghastly. Solomon Grundy for example is a zombie who was originally a human named Cyrus Gold, and he was re-animated by the mystical monolith, but he doesn't walk around in a mindless trance like most zombies do. Mummies at times have been known to come to take on the role of an undead, which means that they are to be considered zombies as well. 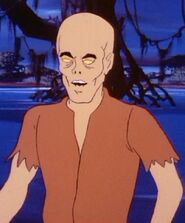 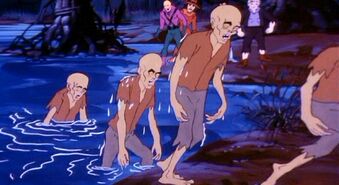 The Legion of Doom control their own army of Zombies!

Zombies attack the Hall of Doom!
Add a photo to this gallery

Retrieved from "https://superfriends.fandom.com/wiki/Zombies?oldid=46215"
Community content is available under CC-BY-SA unless otherwise noted.