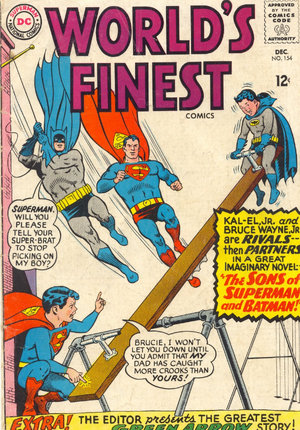 The Sons of Superman and Batman!, which was published in this comic, was later reprinted in the Portuguese language in Super Friends # 17 (1979).[1]

Builders of the Future!

The Sons of Batman and Superman!

A police officer was walking down the street, when all of the sudden he heard a loud racket, he went coming from a nearby hobby store. It was Cap's Hobby Center.

He entered the store and asked Cap what all the racket was about, and Cap told him it was nothing more than a meeting taking place with the local Model Railroad Club. He goes on to explain that they amplify the sounds of the trains to make it seem more authentic.

An airplane is out of fuel and it is forced to land at a foggy airport. But the guy in the control tower tells another guy that he can't land in all of this fog. He then tells him to tell him to go to another airport.

The pilot then tells them, that he can't, because he's out of fuel. Quickly, Super-Turtle arrives on the scene just in time saying "A job for Super-Turtle!" He then takes to flight, bringing along a container of fuel with him and he begins fueling that man's plane.

The man is quite thankful and after Super-Turtle is done fueling the plane he asks him if he'll check the water and clean his windshield next.

Retrieved from "https://superfriends.fandom.com/wiki/World%27s_Finest_154?oldid=92844"
Community content is available under CC-BY-SA unless otherwise noted.