Wonder Dog was Marvin's half-bloodhound pet dog.[1] Marvin had him all dressed up in a superhero costume, since he viewed his dog as his sidekick.

Although he was an animal without the ability to speak,[2] he did have a knack for barking in such a way that he could at times be understood, as if he were speaking real words.[3] He also communicated to others by gestures and acting out scenes.[4]

Although not as intelligent as humans,[5] Wonder Dog seems to be quite a bit more intelligent than most ordinary bloodhounds, and at times, it is Wonder Dog that figures out something that Marvin and Wendy are completely stumped on.

From the SuperFriends Series:

From the SuperFriends Comic Book:

The New Adventures of the Wonder Twins 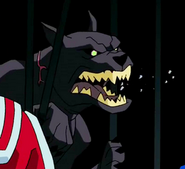 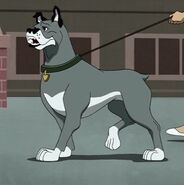