You may be looking for Jack Nimball, the second Toyman.

Winslow Schott was the original supervillain to take on the role of "Toyman."

He was one of Superman's most crazed and dangerous enemies.

He was a toy maker that made toys that had bombs, guns, and other weapons.

At some point during the 1970s, he presumably retires, and Jack Nimball takes over as the new Toyman.[1]

In the early 80's, the Doll Maker made use of the apparently retired Winslow Schott's old toy factory as his lair where he made his magic mold.[2]

Winslow Schott and his sidekick, Toyboy, are both former members of the Super Foes.

Winslow Schott never appeared in any episode of the Superfriends series. The name of Doll Maker's abandoned toy factory was called Big Shott's Toy World (notice that 'Schott' was misspelled as "Shott's"). Writer Rich Fogel stated in the DVD's commentary of this episode that "Shott" was intended to be Winslow Schott. 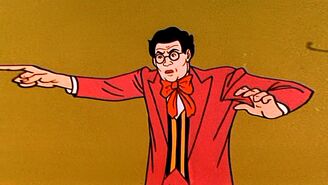 Toyman from his first Filmation appearance. 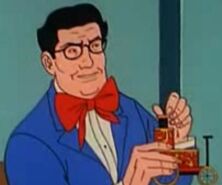 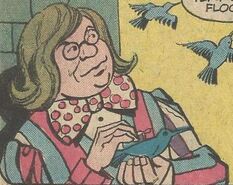 SF Comic Book #1
Add a photo to this gallery

Retrieved from "https://superfriends.fandom.com/wiki/Winslow_Schott?oldid=62636"
Community content is available under CC-BY-SA unless otherwise noted.