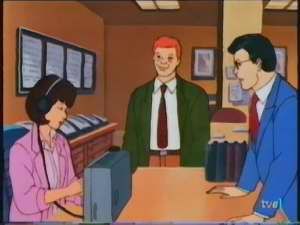 In the Bermuda Triangle, Superman must do battle with a villain known as Wildsharkk, who has been hijacking merchant vessels by creating artificial fog. His recent hijacking was a cruise ship called the Narnia, where two people on board were Perry White and his wife, who were on vacation . One crewman avoided abduction by getting into a lifeboat, to which he radios for help. His distress call is heard by Lois Lane, who sees the chance for a big scoop, but the distress signal is also heard by Clark Kent and Jimmy Olsen, and she is made to bring have the two of them tag along with her to Bermuda. Clark insists he is not trying to beat Lois to a story; rather he is concerned for the safety of Mr. & Mrs. White as well as the other passengers.

Retrieved from "https://superfriends.fandom.com/wiki/Wildsharkk?oldid=53439"
Community content is available under CC-BY-SA unless otherwise noted.