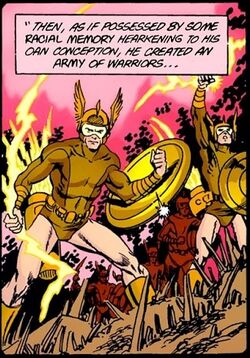 The Weaponers of Qward were created by the Anti-Monitor and originally called the 'Thunderers' -- a legion of troops with the power to throw lightning bolts.

They are a society of smiths and engineers that comprise a large population of the native Qwardian race.

The Weaponers are known for creating the first yellow power ring which became the signature weapon of the villain Sinestro. This ring was used against the Green Lantern Corps, because of Corps power ring's yellow impurity.[1]

The Weaponers were armed with Qwa-Bolts and have spent years combating the efforts of the Green Lantern Corps.

Retrieved from "https://superfriends.fandom.com/wiki/Weaponers_of_Qward?oldid=75759"
Community content is available under CC-BY-SA unless otherwise noted.