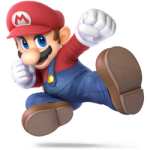 Hi, welcome to SuperFriends Wiki! Thanks for your edit to the File:250px-Mario SSBU.png page.

Hi, I liked you pets page you made, however I have a few questions to ask you about it.

1. Was Fuzzy ever referenced in the Super Friends Universe? Or at least the comic he appeared in. I know some issues of the Superfriends/Super Powers comics cite references to certain comics but I'm not aware of the issue with Fuzzy being referenced or not. If he wasn't, then we shouldn't include him.

2. Whenever possible, we always try to use images from the Superfriends cartoon, comics, products etc. The image you have for Ace the Bat-Hound is the Silver Age version of him. It's not part of the Superfriends family, see what I mean? It would be better if you revert it back to how it was. The other image was from the Scoobyverse, which we use here because of its' connection to the Superfriends through the two episodes from 1972. But that's it, we don't have supplementary Scoobyverse stuff, just stuff that's shown from the perspective of Superfriends. So using material from the Scooby-Doo Team-Up comic is fine, since it has that DC connection, but anything else wouldn't work. Like, the Scooby-Doo crossover with Brave and the Bold for example...that's a separate thing.

Oh I see. Well, the thing is, we don't really use Earth-One material unless it pertains to the Superfriends franchise. You can feel free to click on that link to see what's listed there.

That being said, there is material related to Earth-One and other non-Superfriends universe stuff, as long as they are referenced in some way to the Superfriends franchise. This goes for any universe for that matter. For example, we have the DC Super Friends here, although very little work has been done on it. These are technically not Earth-1A but they share the name so we use them, but they are alternate Earths. As for Earth-One, many of those comics were referenced and even reprinted in the Superfriends, Super Amigos and comic books. All of the Super Powers material is used because it's branded from the action figure line, which was in turn based on the animated series itself. The Super Amigos comics are used because Super Amigos is Spanish for Super Friends.

And so that's how we determine if it belongs to the Superfriends family or not. This is not necessarily how we determine what Earth it belongs to but whether or not it belongs on this wiki. For example, this comic is not set in the Super Friends universe, but that is still used on this wiki, because it was reprinted in this comic, which was a Super Amigos comic. That make sense? So yes, if there's a logical connection to the Superfriends universe, I don't have a problem using that Mouse character at all, but the problem might grow over time. People might think that this is both an Earth-One and Earth-1A wiki and start making pages for any character they feel like and it just probably isn't a good idea.

Please don't get discouraged though, I loved you pets page and I was thinking about making that page myself for quite sometime but I hadn't got around to it because I didn't have a good enough idea. I like what you came up with there. Keep that up for sure.

Hi there, I was just looking at page that was a list of things not Superfriends. I didn't check all of the links, but I can almost certainly assure you that all of those pages are definitely connected to Superfriends in one way or another.

For example, Yogi Bear did indeed appear in the Superfriends, if you look in the "Appearances" section you'll see where. Another character on the list was Wolverine, who appeared in Superman's Dark Secret. Granted, that's not set on Earth-1A, but it is set on this Earth, which has a version of the Superfriends in it. That's why it's here. Other Marvel characters that have pages have them because they are part of various Superfriends toylines, such as The World's Greatest Super-Heroes! or Super Powers Collection. They also appeared in the Underoos commercials that had the Superfriends.

Now some of them pages might not be complete, or are incorrectly sourced, but they do all belong here, and if you look in the "Appearances" section, or somewhere on the page you should see the source somewhere, I am pretty sure most of those pages show where they appeared or were referenced or why they are there.

Storm is Aquaman's steed. He definitely needs a page. Also, Hulk, appeared in an episode of Plastic Man (TV series), it's shown there. Also a different Hulk appeared in a Super Friends comic.

Okay, so what is you opinion about those articles, have you read them? The Hulk article does indeed say what you told me, that he appeared on a poster in a boy's room. Also the Hulk in a costume is still a guy dressed up like Hulk. That's exactly what the article says. I'm interested in what you want to accomplish with that article. You say that it's not a page for deletion, but you are trying to say that the material from here is not from Super Friends! even though they are. Batman: The Animated Series as I said earlier, is for the Super Friends in popular culture page, it hasn't been edited in quite some time and it could use some help. You see there's subtle references to Superfriends in that show, like when the animators intentionally invert the Batsignal on Batman's chest, similar to the way it was done in Superfriends. Static Shock is for the same thing, it's not to be included on this wiki except for that page alone, to talk about allusions to the Superfriends.

Do you have any questions?

Take a look at this page. That'll show you why some of those Non-Super Friends! things are listed there.

It's okay if you don't remember, I can understand, it was a blink and you miss kind of thing. But there are two episodes called Drag Race, the original and the new.

Drag Race, and The New Adventures of the Wonder Twins: Drag Race. Whether or not both of them are in the same universe isn't really relevant, Yogi appears in both and both are part of the Superfriends franchise.

This is the page for Known Universes. It shows all or most of the stuff we have here. Stuff like Earth-31 is only there from the perspective of what was shown in the comic that it was shown in, in other words we don't have everything from that Earth on this wiki. Same goes for Batman: The Animated Series. It isn't part of the Superfriends franchise, so material from that show doesn't belong here, just that page alone to be shown for the Superfriends references.

One more thing I forgot, the overall tone of the Superfriends doesn't determine if its' part of the same reality or not, as the Superfriends comics are darker than the cartoon, and even season 9 saw a huge shift in tone from the older episodes.

I don't really think of the New Adventures of the Wonder Twins as being particularly dark, because it's all done for laughs...you could call it black comedy I suppose. It's certainly not the same universe, although I have yet to assign it one. It's a work in progress.

Retrieved from "https://superfriends.fandom.com/wiki/User_talk:TheAntennaGamer?oldid=91660"
Community content is available under CC-BY-SA unless otherwise noted.