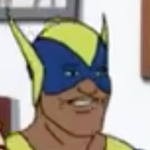 Hi, welcome to SuperFriends Wiki! Thanks for your edit to the The Wild Cards page.

Hello, how are you? I saw your avatar had Cyborg as he appeared in the Anti-drug commercial (1983-1984). Just curious, do you have a copy of that with the audio. I can't find a copy of it with an audio track save for just a brief portion of it that was seen in this video, which as you can see is no longer available.

Anyway, just curious because we have very little information about it as far as voice actors, animators, stuff like that. Anything you might know may be very helpful.

And thanks a million!

I do not. And besides that video had no audio from it. Hanna-Barbera animated the commercial of course, and Ernie Hudson most likely voiced Cyborg. If not him, Buster Jones (the voice of Black Vulcan.) Lord Danielle Pluzsik the Inheritor (talk) 14:18, May 5, 2019 (UTC)

The video I sent you a link to is actually not the same video as the one with no audio...here's a link to another one.

The clip from the Titans commercial is at one minute twenty-eight seconds into the video. And it has sound...not much there but it's something anyway.

Meanwhile, at the Hall of Justice

I'm not actually an administrator myself, just a bureaucrat. I'd like to be an administrator myself. I was wondering if there was a way I could make you an bureaucrat at least, but I can't figure out how to do that. I probably can't do it. User:Superman Fan is an administrator on here, you can talk to him about it. We need help so he'd probably at least make you a bureaucrat, just like me. I can't delete pages that were created from spam and whatever, but I can block people and stuff like that. I can't recall if there's other things that I could do. Anyway, he's the man to talk to.

By the way, I'm just curious, do you have a favorite Super Friends fansite? The reason I'm asking is because those are places to learn more stuff.

As an example, I didn't know that Black Vulcan was the character that was supposed to be used in Journey Through Inner Space instead of Aquaman. Where did you find out about that?

My favorite fansite is this one.

I love Seanbaby's site. And a friend told me about the Black Vulcan thing. They could be wrong but hey Black Lightning originally being used for the show turned out to be true so who knows. "I know I would probably scream, "Great Lightning!" if I ran into something made out of lava and big enough to eat me" Hey! What do you think you're doing? (talk) 19:35, July 1, 2019 (UTC)

Not sure. Do you have DC Universe by chance. It has all nine seasons of the show save for sixteen half-hour episodes from season 3. I don't know why, but only the Legion of Doom episodes from season 3 are on there, not The Demons of Exxor or Sinbad and the Space Pirates and episodes like that aren't there. Which is freakin' stupid, but anyway...

Other than that there all there and I'm sure you can find plenty of Black Vulcan saying "Great Lightning!"

I think my favorite catchphrase of his might be from Harvey Birdman, Attorney at Law: "In his pants!"

Oh hey, I figured out what episode it is, it was The Malusian Blob.

I've never actually made videos before. All of the video content on here comes from YouTube as far as I know. If you were able to make a compilation like that it would be a great video to have on here.

I remember several years ago trying to upload a rock concert I filmed to YouTube and it didn't work. So yeah, I kind of gave up on that.

As for Cyborg, I think his deal was that he just wanted to be a regular person, not a superhero. I don't think that makes him a pussy, but, that's just my opinion. He certainly wasn't as "straight to business" as Black Vulcan was. Why he was cut altogether from the show in season 9 is beyond me, but I think they wanted to make the franchise closer to what the comic books were like at the time, and he wasn't a part of the mainstream DCU.

By the way, something else that might interest you, Black Vulcan was originally supposed to appear in Static Shock back when it was on TV, but for some reason it wasn't allowed and a different superhero was created for that episode. He was called Soul Power.

I don't really remember. As for Soul Power, I'm not sure. Static Shock was a little cheesy anyway so I wouldn't be surprised if there was some corny catchphrase he had...but I just can't remember. I do seem to recall he had a dance, as he was into soul music.

I believe he shouted his name during the season 2 episodes, similar to how Birdman did. Don't he ever did it after that.

I just made you a bureaucrat. Keep up the good work!

As I recall, he didn't do it much after season 2. He may have only did it once in the whole series...that is in one episode.

I saw you made a page with Swayzak. Just so you know, we are a Superfriends wiki, not a Toonami wiki, in fact there already is a Toonami wiki. We do make Toonami pages, but only if they are relevant to the Superfriends franchise. So if there's a good reason for that page to be on here, then we don't have a problem with that, but you'll need to cite the reason, especially in the article itself. Otherwise I don't see the need for the page unless the Superfriends had something to with it. Sound good?

Well, seeing as we had some characters like Moltar on here, I decided to do the rest of the Toonami characters. He was also voiced by Martian Manhunter's voice actor. Hey! What do you think you're doing? (talk) 20:58, March 11, 2020 (UTC)

I see. Actually I also checked the history on the page and someone else created that page. Yeah Moltar is a little different since he was in the Super Friends Toonami commercials in the 1990s. Also he's a Space Ghost character, which I believe is actually in the Superfriends universe. That other guy was shown in Toonami years later. It's not really a major deal to me right now but I was just making sure. If it makes sense from a Superfriends perspective then by all means, keep it. I personally don't think it does, but that's just my opinion.

Retrieved from "https://superfriends.fandom.com/wiki/User_talk:Konnichiku?oldid=89354"
Community content is available under CC-BY-SA unless otherwise noted.