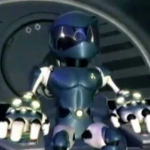 Ha-hey! My name is Danielle and my mom used to watch Challenge of the Super Friends when she was a kid in the 70s! Being a DC fan, I inherited my Super Friends fan status from her! I have a crush on Cyborg, Black Vulcan, and Birdman! (And strangely enough Martian Manhunter. I don't know why. Has to do with Swayzak, who I also have a crush on.) I also own a LOT of the Figures Toy Company "World's Greatest Heroes" figures. Including almost all of the Super Friends.

I want to work at Cartoon Network as their CEO or creative director when I get older, and I'll produce a reboot of Super Friends that will air there.

Black Vulcan is my favorite Hanna-Barbera character, Birdman being second.

I'm the one who made that awesome gallery of Black Vulcan (or "B.V." as I like to call him!)

I contributed to the Super Friends fandom as a whole by introducing Michael Jones (Black Vulcan's civilian identity) and the characters of Rai and Supervolt.

Retrieved from "https://superfriends.fandom.com/wiki/User:Konnichiku?oldid=94343"
Community content is available under CC-BY-SA unless otherwise noted.