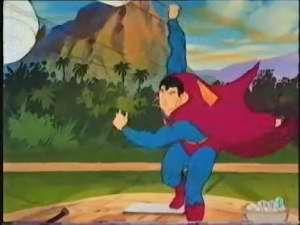 Clark Kent is preparing for what he considers the best part of his job, covering the World Series, which are slated to be held in Metropolis! Jimmy Olsen is curious why Clark is such a fan, and Clark replies he grew up watching the game and it represents one of the ideals of America (also hinting how he is Kryptonian by birth and his American world is in fact, an adopted one). However, all is not well, as Prankster has been committing robberies. Prankster especially has a vendetta against Superman, not only by calling him "Stupidman", but also in that he vows revenge. Many years earlier, Superman stopped Prankster. Now Prankster is determined not to lose a rematch. On Game 1 of the World Series, Prankster reappears, and steals the World Series itself! His crimes were to build a complex ray that ends up transporting both teams called the Metros and the Goliaths to a far away remote island.

Prankster reveals his grand scam; when he had been imprisoned, he was cut off from the outside world, and as such missed chances to attend, watch or read about baseball, which he suffered as a huge baseball fan. Now free, he will treat himself to his own private World Series on an island hundreds of miles from the nearest civilization. Prankster then showcases a team of robots who will play against both human baseball teams, and Superman will be the pitcher for the robot team! Superman claims Prankster is crazy, but Prankster threatens to murder both big league teams, Lois Lane (who wrote the article that exposed his crimes), Jimmy Olsen (who took the incriminating photos of him), and Judge Cook (who presided over his trial) if Superman refuses. With no other choice, Superman and the big league teams play ball. Superman's robot team does poorly against the human players, and Prankster threatens to go ahead with murder if Superman does not hit a home run the next time he is up to bat. Superman succeeds at hitting the homer, but Prankster figures a superpowered Kryptonian would not have a hard time hitting a home run anyway, and orders the robot team to commence the murders. Superman defeats Prankster's robots, and reverses the transporter ray to go back to Metropolis.

Back in Metropolis, after a delay and time of rest, the real World Series commences, and Clark begins work on reporting. Meanwhile, the Prankster is shown behind bars while the prison guards are listening on a radio. A sniveling prankster begs the guards to "be a pal" and let him listen to an inning or two. One prison guard sternly states "Sorry Prankster, no baseball for you for a long time!"

Retrieved from "https://superfriends.fandom.com/wiki/Triple-Play?oldid=53421"
Community content is available under CC-BY-SA unless otherwise noted.