Titans Lair was the 'original' headquarters of the Teen Titans back in the late '60s. It was located in a cave outside of Gotham City that used to serve as a records storage facility for Wayne Enterprises. Bruce Wayne allowed them to use it as their base of operations.

The only electronic equipment available to members was a short-wave radio and a television receiver. The Titans received mail from teenagers needing help, and they sponsored airtime on a special television channel called the Hot Closed Circuit, so anyone could deliver a five-minute appeal to the Teen Titans. Wonder Girl usually picked up the mail, most of it coming from teens with questions or kids in trouble.

This underground facility has been upgraded several times. 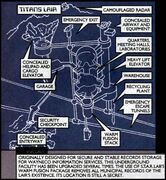 Retrieved from "https://superfriends.fandom.com/wiki/Titans_Lair?oldid=62088"
Community content is available under CC-BY-SA unless otherwise noted.