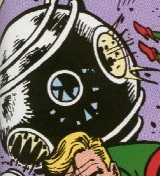 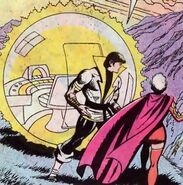 Time Bubble
Creator: Brainiac 5
Add a photo to this gallery

A time machine was any type of machine that was capable of sending someone or something forward or backward through the timestream.

Time travel wasn't very common in the universe, although some characters, such as aliens and metahumans, had the ability to travel in time without the need of a time machine. The Flash for example, could move so fast he could break through the time barrier. Many characters were also capable of that, such as Superman, Black Vulcan and Green Lantern. (although the latter needed his power ring in order for that to work)

But for most people, this was not possible, especially for normal Humans that lived on the planet Earth. It's difficult to say who invented the first time machine, as their were many in development during the 20th century that were only prototypes. Lex Luthor invented a time machine, but it was only capable of sending a video message through time, allowing him to speak to Merlin in the 6th century.[1]

The man who seemed to make the most advancement in such technology was Professor Carter Nichols, who used hypnosis as a means to travel through time with his time machine that he called a Time Ray. But even his machine was not nearly as advanced as Rip Hunter's Time Sphere or Brainiac 5's Time Bubble that would be invented in the future.

Retrieved from "https://superfriends.fandom.com/wiki/Time_machine?oldid=87829"
Community content is available under CC-BY-SA unless otherwise noted.