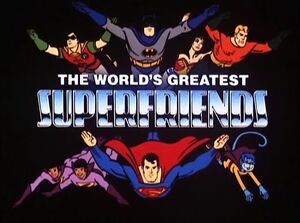 Chronology
Previous Series:
Challenge of the SuperFriends (1978)
Next Series:
1980 Shorts

By the year 1979, the Super Friends were going strong on the ABC Network Saturday mornings. After an amazing year with the Challenge of the SuperFriends series, Hanna-Barbera decided to get back to basics and make eight new episodes with the established core group along with Zan, Jayna and Gleek. They also went back to an hour length format as well.

The Superfriends also were back in the 8:00 am timeslot followed at 9:00 by fellow DC hero, Plastic Man in his own show, the Plastic Man Comedy Adventure Show.

This particular incarnation of Super Friends relied heavily on folklore and classic fairy tales for plots (i.e. Aladdin, Camelot, the Hobbit, Lord of the Rings, 20,000 Leagues Under the Sea, Frankenstein, and the Wizard of Oz). The series also borrowed from (then) contemporary politics, as the main villain Kareem Azar in "Rub Three Times For Disaster" is almost a carbon copy of the late Iranian religious leader Ayatollah Ruholla Mussaui Khomenei (1900–1989).

No more Legion of Doom, and fewer heroes this time, although Lex Luthor does return for one episode.

The majority of the season consisting of repeats of the second incarnation, The All-New Super Friends Hour from 1977.

It's the World's Greatest SUPERFRIENDS!

Banded together to protect the universe from the forces of evil; the SUPERFRIENDS!

Dedicated to truth, justice and peace, for all mankind!

For a DVD set of The Worlds Greatest SuperFriends series check out I Miss My TV Show, an incredible website for old and rare cartoons. (This links to a website that no longer exists.)