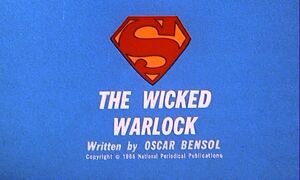 Setting
Metropolis, 1971
Previous Episode
Next Episode
Merlin's Magic Marbles
The Chimp Who Made It Big

In Metropolis, an armored truck carrying precious jewels approaches Monument Circle, on it's way to the Metropolis Jewelry Exchange. But a sorcerer supervillain called the Warlock is waiting. He then says: "By Lucifer! This will shake them up!" He then aims his Sorcerers Ruby on the tip of his cane at the statue in the middle of Monument Circle. It comes to life and fires a cannon at the armored truck, causing it to fall over. The two guards step out of the truck wondering what happened. The statue is now magically alive and it rushes them and they begin opening fire with their rifles. The bullets bounce off of it, and it reaches down inside the armored truck.

Meanwhile, in his office at the Daily Planet, Clark Kent's super hearing detects the sound of the armored truck's alarm. He immediately leaves his office and heads to the supply room where he changes into Superman. He exits the Daily Planet through the window and flies off toward the armored truck. He then spots the Monument which Warlock brought to life, wondering who he is, and he sees the monument loading a motorcycle with the jewels. The Warlock, who was hiding in a manhole comes out and puts the monument back in place where it belongs, and it turns back into marble. Superman is baffled. Warlock then makes himself invisible and starts driving the motorcycle. From Superman's perspective, it would appear that the motorcycle is driving itself. He deduces that it must be black magic. He believes there's something fishy about this, so he lifts the motorcycle and flies over to Metropolis Bay and tosses him into the river, to let the fish take care of it. Out of the water emerges the Warlock, who is angry that Superman unknowingly tossed him into the river and thwarting his plans to steal the jewels, and he tells himself that the magic of his ruby, though it is tiring out has got to do the job.

Meanwhile, back at the armored truck, Superman sees that among the jewels he tried to steal was a sorcerers ruby with the image of Lucifer on it, that was identical to Warlock's own ruby. He then deduces who was responsible for the attempted theft. It's Warlock. Superman then flies up to the top of a building and stands underneath billboard sign advertising Sparkle Toothpaste. He is on the lookout for the evil villain. While in an alley, Warlock, realizing that the magic of his ruby is almost depleted, makes another attempt to steal the other ruby down below. He uses his magic to make the toothpaste on the billboard sign come to life and stick to the guards. Warlock turns himself visible and grabs the new ruby. Superman flies down to grab him but he vanishes, becoming invisible again.

Meanwhile, back at the Daily Planet building, a news headline has just been printed for the front page story that reads "Superman Fails to Capture Gem Thief." Jimmy Olsen asks Perry White if its' possible that the Warlock is more powerful than Superman. Perry White then tells him if he is more powerful than Superman, Metropolis is in for some real trouble.

Meanwhile, at the Waterfront, the Warlock replenishes his old ruby with the new one. Warlock then uses his fully charge ruby to bring an Ocean Liner to life, and he sends it on a rampage through Metropolis, and it drives down Main Street, passing the Daily Planet.

At the Daily Planet, Perry White and Jimmy Olsen see the ocean liner driving down Main street. Perry notices a school bus stalled in the middle of the road, next to the Main Street Store, and the big boat heading right toward it. Superman flies toward the scene and uses his super strength to stop the ship from ramming the bus. Superman returns the ship to the water, and Warlock is ticked off that he has been foiled again!

Superman flies back to shore, where he meets Jimmy. He asks him how all this is happening. Superman then points to the top of a building and shows him Warlock. He tells him every time he tries to catch him he makes himself invisible, but he has a plan to catch him that just might work. The Warlock tells Superman his magic is far more powerful than he is. Superman then tells him that he could make the globe on top of the Daily Planet spin like a top. Then he asks the Warlock: "Can you?" The Warlock mocks him and tells him it's mere child's play. He uses his magic to do just so, and as he raises the cane, Superman runs over and grabs it, just as the Warlock turns invisible. He then uses his super strength to stop the globe from spinning.

He lands back on the ground and meets Jimmy who was waiting for him at the Waterfront. He tells him that's the last time Warlock will raise "Cane" around here. He then crushes the ruby. And tells Jimmy that Warlock will have to start squeezing toothpaste with his fingers like every other normal person.

The episode title refers to the wickedness of a supervillain called Warlock. A warlock is a male witch, which is a person who uses magic potions to cast spells on people or objects.

Lois Lane does not appear in this episode.

Retrieved from "https://superfriends.fandom.com/wiki/The_Wicked_Warlock?oldid=84174"
Community content is available under CC-BY-SA unless otherwise noted.