The Tree Man of Arbora 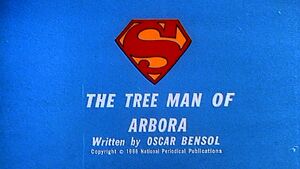 Setting
California, 1971
Previous Episode
Next Episode
The Men from A.P.E.
The Image Maker

In the Western Desert, at a centuries old meteor crater, two men in a car discover a tree that has sprung up over night, and learn that the tree is different from any other tree on Earth and that it must have came with the meteor centuries ago, and it must be from another world. Just then, the tree sprouts arms and has a face, and it knocks the two men aside and begins drinking the water from their car. It then makes its' way to a suburban community, and drinks the water out of a swimming pool. It also drinks the water out of a duck pond and a factory water tank. With each water consumption the Tree Man continues to grow in size, becoming a giant monster.

Meanwhile, at the California State Police Headquarters, The Sergeant receives a phone call by someone telling him that a giant creature in Rocky Canyon is trying to rip the dam apart. Clark Kent who is present, is told this by the police officer, and he tells him he's getting out of there, for fear he may be killed in a flood. He then sneaks off and turns into Superman and takes to flight to the Rocky Canyon Dam.

While at the dam, the tree rips the dam apart and it is swept downstream by the massive flood waters, but it comes ashore and transforms itself back into a normal looking tree. As Superman arrives, he sees that the floodwaters are heading closer and closer to the town. Superman then pushes a giant rock mass in the path of the floodwaters so as to create his own dam. Superman begins searching for the Tree Man, but he can't locate him.

He begins searching near the Redwood Forest, and a Forest ranger tells him that he was spotted heading deeper into the forest, and he was three hundred feet tall. Superman fears that at that height he won't be able to find him since all the redwood trees in the forest are very tall like him.

In the forest, a man and his son notice a big tree, which unbeknownst to them is the tree man, and the boy decides he wants to carve his initials in it with his knife. This inflicts pain in the tree man and he grabs the man and throws him. Superman sees the man and catches him and tells him he shouldn't be up there with a plane. He sets him down and he tells him the tree is alive. Superman stuffs a tree stump into the creature's mouth and it falls to the ground. He then picks up the alien tree and flies into outer space, where he takes him to the planet known as Arbora, which Superman says is his homeworld.

Later, in Clark Kent's office in the Daily Planet, Clark asks Beanie what he has, and Beanie tells him he got a tree for him, and Clark tells him to take it away, but Beanie tells him he'll get used to it, because it will "grow on you." And then Clark says: "Yeah, that's what I was afraid of."

The title refers to the Tree Man, who is the antagonist of the episode, and his home planet, Arbora.

Retrieved from "https://superfriends.fandom.com/wiki/The_Tree_Man_of_Arbora?oldid=84191"
Community content is available under CC-BY-SA unless otherwise noted.