SuperFriends Wiki
Register
Don't have an account?
Sign In
Advertisement
in: Shorts, The New Adventures of Superman episodes

The Toys of Doom

View source
A Filmation Series:
The New Adventures of Superman

The Toys of Doom 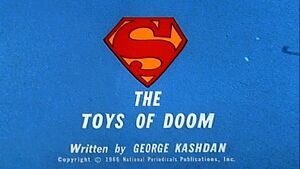 Following an anonymous tip, Lois Lane and Jimmy Olsen are cautiously approaching a Factory building on the outskirts of Metropolis. Upon entering they see a bunch of giant stuffed toys. They see a giraffe, bears, an alligator, Lion, Elephant and a clown. Lois is convinced that they have located the Toyman's new headquarters. Just then, the jaws of the mechanical alligator open up and it's powerful lungs draws them in upon inhaling. They fall down a slide and enter the factory's basement, which is being utilized by the Toyman as his lair. Toyman welcomes them to his new headquarters. He tells them that he was the one who phoned in the anonymous tip, because he wanted to keep Superman off his back. Toyman then shows them one of his toys, and tells them he will demonstrate what it does, and tells them to follow him to the roof.

Meanwhile, at the Daily Planet, Perry White asks Clark Kent if he knows where Lois and Jimmy headed off to. Clark doesn't know, and just as he's about to answer the Toyman's flying top is flying around outside and tearing up a building across the street. He then runs off to change into Superman and flies out the window. The whole top of a building falls off because it was cut by the top and Superman catches it and sets it down in the middle of Main Street. He then flies after the top and grabs it and tosses it into the river.

Across the river, Toyman and his goons, along with Lois and Jimmy are on the roof of Toyman's hideout and one of his goons observes through his binoculars Superman destroying the top. But Toyman tells him that it's not that big of a deal, because they haven't seen nothing yet.

A short while later at the waterfront, an ocean liner is about to depart from Metropolis when all of the sudden a bright light flying through the sky blinds everyone, like a great big glowing ball. Just then, Toyman's goons board the ship to loot it. And Superman flies toward the glowing ball and smashes it with a single punch.

At the same time, a giant calliope is rolled into position and the music from the organ pipes are so high pitched that they cause the buildings around it to crack. Superman flies down and smashes the toy into a ball. Just then, a police officer tells Superman that while Superman was dealing with all of these crisis situations, a bunch of robbers were looting every shop on the street. Superman then realizes that this must be the work of the Toyman. He then leaps for the sky and using his telescopic vision he locates Toyman's hideout and Toyman himself when he X-rays the building. He then alerts the police, and immediately bashes through the wall to surprise him. But Toyman tells Superman not to act so quickly, and he directs Superman's attention to his toy soldiers and tanks, which fire live ammunition. He then tells him that Lois and Jimmy are in one of the tanks, but since they are lined with lead he won't be able to locate them. Superman sees that he's in a bit of a standoff situation, so he asks the Toyman what he wants. He tells him if he doesn't leave at once he'll set the war game into motion, and it would be a tragedy if the tank with his friends gets blasted. Just then, the police sirens can be heard and Toyman is surprised. He knows that Superman alerted them and he wants to make him pay. He puts the war game into motion, and the toy soldiers start shooting their guns, but Superman uses his invulnerability to shield the tanks from the bullets. Cannon balls are fired at him, but he catches them and throws them back at the cannons and destroys them. Toyman is shocked by Superman's display of power. Superman begins tearing tanks open until he finally located Lois and Jimmy. Just then, the Toyman and his goons make a break for it, but they are soon stopped by the police at gunpoint.

Later, at the Daily Planet, Lois is reading the newspaper about how Toyman is captured by Superman, and she can't help but notice that the story was written by Clark Kent. Jimmy tells her he scooped her again. Then Lois tells Clark it's almost as if he could foretell the future since he got the story out so fast. He tells her that he and Superman think so much alike.