The Threat of the Thrutans 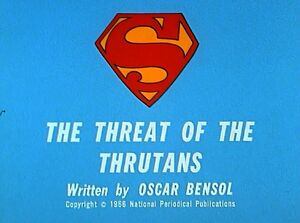 In outer space, a space ship from the planet Thruta is on its' way to Earth on a mission to observe the planet. Inside the craft, are two green skinned, pointed eared aliens. Suddenly, a flareup of Sunspots affects their electrical systems. The ship spirals out of control and the rocket malfunctions. They activate the saucer separation unit and the saucer settles into orbit in the upper atmosphere. Now these aliens are desperate to find a rocket that can get them back to their home world. They send out a little saucer device which has the appearance of a probe.

Meanwhile, at the Daily Planet, Jimmy Olsen is talking to Clark Kent in his office. Clark is typing a story on his typewriter while Jimmy tells Clark he wishes he could get in on a real ground shaking story. Just then, what sounds like an explosion which rocks the whole building occurs. Jimmy is frightened. He takes cover under the desk. Clark tells him it looks like he got his wish. Clark uses his telescopic vision and sees that a tower on top of the Metropolis High School is about to fall over on the football field. While Jimmy is under the desk an unable to see Clark he changes into Superman and flies out the window and heads toward the school. He catches the tower before it falls and determines that it wasn't likely an earthquake, but more likely an explosion that caused the tremors.

Nearby, at the Metropolis Space Rocket Launch Base, a Colonel tells the General that the explosion came from 15 miles away in a field. The General looks at the Colonel and asks him what or who it is. They then see the Thrutan space ship hovering in the sky above. The Thrutan commander speaks into a microphone so that the military officers can hear him, and tells them the explosion was not meant to harm anyone, just to demonstrate their power. He then goes on to order the military officers to vacate the premises so that they can steal the rocket ships. The General orders a missile strike to blast them out of the sky. The missiles don't even scratch the ship, and after that, the Thrutans drop another bomb to wipe out the base. When the bomb lands on the top of the mountain, it doesn't explode. The General reasons that it must have a delayed fuse to give the aliens time to get out of range. The Colonel tells him they'll have to defuse it. So they climb up the mountain to do so, but there's not enough time. In the sky above, Superman speeds down to the bomb and covers it with his body, and thanks to his invulnerability, he is able to shield the base from the blast. However, the blast still causes an avalanche, and the two military officers have to take cover from falling rocks, and they are certain that the base will be wiped out by the falling rocks. Superman grabs a tree out of the mountain and with it digs a trench to keep the falling boulders away from the base. The General and the Colonel as well as the rest of the base is saved from destruction.

Superman then flies over toward the alien spacecraft and grabs a hold of it, and he flies up into space and using his super strength he throws them back toward their home galaxy. The Thrutans are now happy.

Back at the Daily Planet, Jimmy asks Clark how he manages to get such great news stories. Then he tells him that sometimes he has to "dig" for a story.

The title is pretty self-explanatory. It refers to the threat posed by the Thrutans.

Retrieved from "https://superfriends.fandom.com/wiki/The_Threat_of_the_Thrutans?oldid=84173"
Community content is available under CC-BY-SA unless otherwise noted.