The Superman/Aquaman Hour of Adventure 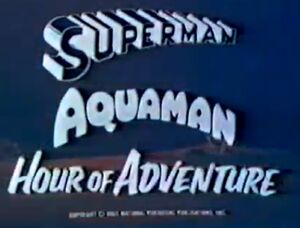 The Superman/Aquaman Hour of Adventure was a Filmation animated series that aired on CBS from 1967 to 1968. Premiering on September 9, 1967, this 60-minute program included a series of six-minute adventures featuring various DC Comics superheroes.

Each hour consisted of new segments from these Filmation Associates productions:

From the point of view of Superman fans, it is generally regarded as the second season of the New Adventures.

Fans of Aquaman see it as the premiere season of The Adventures of Aquaman.

It introduces us to all of the cast in the show: Superman, Aquaman, Flash, Green Lantern, Hawkman, the Atom, and the Teen Titans. Superboy is the only one missing from this opening.

The Superman/Aquaman Hour of Adventure![1]
Superman! Aquaman!
All the super-duper heroes,
They always fight for what is right!
Live with danger and adventure,
They are Men of Might!


Superman, the Man of Steel
Performs super deeds with ease!
Aquaman's the bold and daring
King of the Seven Seas!


Hawkman, from another planet
Swoops down on the foe!
Nothing stops the Teen Titans
Anywhere they go!


Flash defies the eye to follow
With his super speed!
Against the force of evil
The Atom will succeed!


Superman! Aquaman!
All the super superheroes
Are the Justice League of America,
Men of Might!

In 1968, after the series was finished, the show's three main components were again divided amongst other shows.

The show continued to evolve a narrative format that had been started with the original Superman radio show. Specifically, it featured a narrator who served to both compress and dramatize the storytelling. Whereas the first season of The New Adventures of Superman had featured longtime radio narrator, Jackson Beck, Superman/Aquaman was the first to feature actor Ted Knight, who had made his Filmation debut as Perry White late in the previous season of The New Adventures. He would become the main voice used in the narration of DC cartoons for over a decade. He remained the unofficial "voice of DC" even during the first year the cartoons were produced by Hanna-Barbera under the SuperFriends banner.

In 1995, a short-lived TV series, titled The Superman/Batman Adventures, was transmitted on USA Network. It later aired on Cartoon Network and Boomerang.

In 1985, Warner Home Video released eight selected Aquaman episodes of the series on VHS in the "Super Powers" video collection, along with Batman, Superboy and Superman. These videos were re-released in 1996 and are out of print. On October 23, 2007, Warner Home Video released The Adventures of Aquaman: The Complete Collection on DVD in Region 1; the 2-disc set features all 36 Aquaman segments from the series, as well as special features.

Warner Video also released DC Superheroes: The Filmation Adventures on August 12, 2008. The double DVD set features 18 cartoons starring Hawkman, Green Lantern, The Flash, The Atom, the Teen Titans, and the Justice League of America. The collection was released in Region 2 on October 13, 2008. Interesting to note, Hawkman was missing from the DVD menu, and Birdman instead appeared.