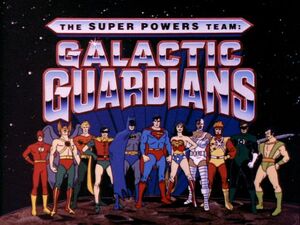 In the fall of 1985, the final version of Hanna-Barbera’s SuperFriends premiered. The show takes a new, more realistic style (and very different).

It is considered one of the most faithful TV adaptations of DC Comic superheroes, second to The Challenge of the SuperFriends. This series would run for only one season on ABC, signifying the end of the Hanna-Barbera’s 12-year run of the SuperFriends.

Even though the Super Friends once again had a new format, it was really the second season of SuperFriends: The Legendary Super Powers Show. On the DVD extras, they call it a graduation and could be considered a series by itself because of the changes Hanna-Barbera implemented into this new series.

Gone were the simplistic character designs by Alex Toth we knew so well and in their place were beefed up designs of the heroes and villains designed by DC Comics artist Jose Luis Garcia-Lopez, who also designed the characters for the Super Powers toyline and products.

The tone of this series was notably more serious than Super Friends had been in the past.

Sadly, this series only lasted one season, and was ultimately canceled. The final new episode aired was "The Death of Superman", which originally aired on November 6, 1985. This third cancellation would prove to be the final one and Galactic Guardians marked the end of Hanna-Barbera's 13-year run of the series when it last aired on September 30, 1986.

Although this is the final SuperFriends series, it's not the last time we see the SuperFriends universe. In 1988, just two years after this final season of the Super Friends, a new animated Superman series came out on CBS that was created by Ruby-Spears Productions. On the episode called “Superman and Wonder Woman vs. The Sorceress of Time", Wonder Woman guest stars, and B.J. Ward reprises her role as Wonder Woman.

This DVD series is available through Amazon – The The Super Powers Team: Galactic Guardians (DVD-2007).

Retrieved from "https://superfriends.fandom.com/wiki/The_Super_Powers_Team:_Galactic_Guardians?oldid=80848"
Community content is available under CC-BY-SA unless otherwise noted.