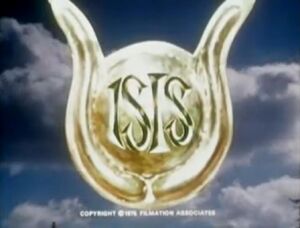 "The Secrets of Isis" was a live-action, CBS television series that featured the adventures of Isis. It was produced by Filmation in the 1970's originally titled Isis that appeared during the Saturday morning cartoon lineup.

The show was later paired with the Shazam! series and it was called "The Shazam/Isis Hour." The Secrets of Isis also aired in various countries around the world.

As indicated on commentary in the 2007 DVD release of the series, and supported by examining broadcast premiere dates, Secrets of Isis was the first weekly American live-action television series starring a female superhero (predating the weekly debuts of both Wonder Woman (TV series) and The Bionic Woman; the character Batgirl had been a regular on the final season of the 1960's series Batman, but was not the lead character).

"O my Queen," said the Royal Sorcerer to Hatshepsut, "with this amulet, you and your descendants are endowed by the Goddess Isis with the powers of the animals and the elements. You will soar as the falcon soars, run with the speed of gazelles, and command the elements of sky and earth."

3000 years later, a young science teacher dug up this lost treasure, and found she was heir to --- The Secrets of Isis!

And so, unknown to even her closest friends, Rick Mason and Cindy Lee (later Rennie Carroll), she became a dual person: Andrea Thomas, teacher . . .

. . . and Isis, dedicated foe of evil, defender of the weak, champion of truth and justice!

The Secrets of Isis (also called simply Isis) starred JoAnna Cameron as Andrea Thomas, a high school science teacher who found an ancient mystical amulet on an archeological dig in Egypt. The amulet belonged to Hatshepsut, an ancient Egyptian Queen and it gave the wearer the powers of Isis. Andrea, by virtue of being able to open the casing in which the amulet rested, was recognized as an heir to Isis's secrets. Whenever Isis was needed, Andrea would reveal the amulet and recite an incantation ("O Mighty Isis!") and she would be transformed into the goddess Isis.

As Isis she was given great strength, the ability to move inanimate objects, and the power to fly and run at super speed. To invoke her powers, she often intoned rhythmic rhyming chants, such as "O zephyr winds which blow on high, lift me now so I can fly," which enabled her to fly. Isis used her powers for good by capturing criminals, righting wrongs, and helping anyone who was in danger. Unlike other superheroes who responded when people called their name, Isis often came to the rescue of people who didn't call for her, arriving in the nick of time and encouraging the evildoer to see the error of their ways through self-reflection. Even without the help of Isis, Andrea Thomas demonstrates high intellect (in the episode "The Sound of Silence," she invents a force field powered by a uranium pellet), and also has some abilities even when not in the guise of Isis, such as in "Sound of Silence" when she gives telepathic instructions to her pet mynah bird Tut.

Secrets of Isis often broke the fourth wall[1] with Isis/Andrea winking at the camera or otherwise acknowledging the audience at pertinent moments. This is in addition to the "moral" segment at the end of each episode (see below).

Isis aired on CBS from September 6, 1975 to September 3, 1977 (15 episodes in first season, seven in the second, totaling 22 original episodes) as part of the Shazam/Isis Hour. The success of the show led to syndication of the series the following year as The Secrets of Isis, reruns of the 22 previously-produced episodes. The character also appeared in three episodes of Shazam! Isis later appeared in animated form (voiced by Diane Pershing) on Filmation's Tarzan and the Super 7 show in 1980, as part of a segment called The Freedom Force, as well as a guest appearance on the cartoon Hero High.

The series spun off a comic book produced by DC Comics. Although Isis is often cited as a DC creation, the series is one of the very few Filmation originals (most of their creations were adaptations of previously existing material); the character was created specifically for the television series and was only later adapted for comics.

BCI Eclipse LLC (Under license from Entertainment Rights) released The Secrets of Isis: The Complete Series on DVD in Region 1 on July 24, 2007.[2] The 3 disc set includes many special features. As of 2009, this release has been discontinued and is out of print as BCI Eclipse ceased operations.[3]

Retrieved from "https://superfriends.fandom.com/wiki/The_Secrets_of_Isis?oldid=76286"
Community content is available under CC-BY-SA unless otherwise noted.