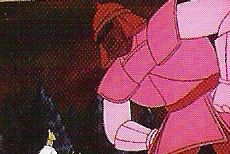 A young boy named Kyoto gains the power to become the Scarlet Samurai, a giant with powers rivaling Super Samurai's own. But Kyoto is being used by the evil Kaliastro in a scheme for revenge!

In the Valley of Time, Sinbad is making a stone statue of Isis. He tells her that something so lovely is sure to bring him luck. Isis then tells him that he is a good sculptor, a better sailor, and a master of flattery. Toshi peaks into the room and Isis notices as he quickly rushes off. Isis feels sorry for him, feeling that he needs someone his own age to play with.

Elsewhere in the Valley of Time, Merlin is levitating. Toshi asks if anything is wrong, to which Merlin tells him that there is a great evil among them, and he must continue probing until he locates it.

Toshi wanders outside and meets a young boy named Kyoto, who is practicing archery, Toshi tries giving him some archer tips, but this frustrates Kyoto because he makes him miss. Toshi then apologizes, saying he was "only trying to help." Kyoto then challenges him to a archer contest, the first one to miss the target loses. Kyoto ends up missing the target, resulting in Toshi being the winner. Kyoto then challenges him to accompany him to the Forbidden Valley, which lies over the nearby mountains. The Forbidden Valley is a place even the bravest warriors dare not go. Toshi tells him that the last one there is a serpent's egg.

Upon their arrival, they found themselves caught in the middle of a battle between two ferocious animals. They take cover in a cave and the beasts' heads collide, and they lock horns. Kyoto says now's there chance to make a break for it, but Toshi tells him they can't just leave the two animals there locked on each other in such a way. He then transforms himself into Super Samurai and rushes to help the animals. He then transforms back into Toshi. Kyoto tells him he must be a wizard, but Toshi tells him his powers are a gift from the gods. This upsets Kyoto, who feels it is unfair that Toshi has so much skill and powers, and yet he has nothing. Toshi reassures him that he has other talents and that he shouldn't worry about comparing himself to someone else.

Later that night, Kyoto talks to his father Ishito, asking him if there is any magic that can make him strong like Toshi. Ishito tells him that magic is time, and that he needs sleep, not magic. After his father leaves the room, a mysterious voice starts talking to Kyoto, and a book of magic spells floats over to him, and the voice reassures Kyoto that he will help him, and that all he needs to do is read the spell in the book. He does so, and just then, an evil being known as Kaliastro appears, saying that he is free at last and that it is time to get revenge on the person that banished him. Kyoto then asks him how he uses his super powers. He tells him that he only needs to say Scarlet Samurai. So he does, and he transforms into the Scarlet Samurai, nearly identical in appearance and power to Super Samurai. Kaliastro tells him not now, because his powers must be kept secret. But what the boy doesn't realize is that the evil sorcerer wants revenge against his own father, Ishito, and that he plans to have him help him get it.

Meanwhile back at Ishito's house, Kaliastro tries to send Ishito to the Nether world, but is unable since his powers have grown since their last encounter. However he knows that his son can stop him. And he promises to use him against him. Kaliastro then summons the Scarlet Samurai with some sort of mystical telepathic transmissions and tells him that his father is in danger and that he must go to him at once. He tells Super Samurai what has happened and he agrees to help him, and they stop fighting and both of them head toward his house.

Meanwhile at the Valley of Time, Merlin tells Isis that he had intercepted the telepathic transmission from Kaliastro to Scarlet Samurai. He tells Isis they must rush to the House of Ishito the wizard at once.

Meanwhile, at the House of Ishito, Kaliastro opens the gateway to the Nether world, and the Gatekeepers of the Nether world are ready to greet Ishito's son and show no mercy. Super Samurai and Scarlet Samurai arrive and are attacked by the Gatekeepers of the Nether world, meanwhile, a little bit of Kaliastro's magic causes the Scarlet Samurai's super powers to disappear. And while a powerless Kyoto has to deal with the two Keepers, Super Samurai as to take on a giant dragon. Just then, Isis, Hercules (riding on Pegasus) and Merlin race to the rescue. Together they are able to defeat the evil being. Kyoto learns his lesson and realizes that he was wrong to got to such lengths to get superpowers, just so he could be better than Super Samurai. He then apologizes to everyone.

Retrieved from "https://superfriends.fandom.com/wiki/The_Scarlet_Samurai?oldid=80326"
Community content is available under CC-BY-SA unless otherwise noted.