The Robot of Riga 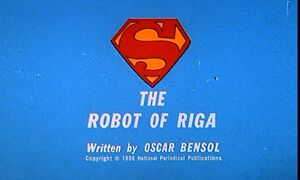 At night, in a vast Marshland near Metropolis, Lois Lane and Jimmy Olsen are investigating reports of a U.F.O. sighting. Lois tells Jimmy that they're hopelessly lost. Jimmy tells her not to worry and presses his signal watch. Instantly the signal reaches Clark Kent, who is able to hear the signal with his Super hearing, even though he's miles away in his office at the Daily Planet. Even though the signal reaches Clark, Jimmy and Lois already sight the U.F.O. flying overhead. They are brought up to the ship by a tractor beam. Superman pursues the ship up into space, and he is surprised that the ship is fast enough to keep away from him even though he's moving at super speed.

Aboard the ship, Lois and Jimmy meet their captors, spacemen from the planet Riga. They are then thrown into a cell that his guarded by a mechanical eye. Jimmy tries to smash it with a chair but the eye fires a laser energy blast at the chair and vaporizes it. Meanwhile, in outer space, Superman can still pick up Jimmy's signal, despite the fact that its' growing fainter by the minute.

The ship then lands on the planet Riga. Lois and Jimmy are escorted out of the ship where they find themselves in some sort of zoological park, and they are put into an electrical cell, where they are part of an exhibit in the zoo. Meanwhile, in space, Superman notices that Jimmy's signal is getting stronger, and he homes in on the planet Riga. Back on the planet, one of the aliens is bringing food to Lois and Jimmy's cell, as soon as he removes the bars they run off toward the ship. The food server then blows the whistle and just then, a giant robot with a flame thrower in his mouth is sent after them. It grabs them with its' mechanical hands and lifts them up. Superman then arrives and attempts to rescue them, and he kicks the robot with his feet, causing the robot to drop the two of them, and Superman swoops down and catches them. Superman flies back up to attack it and slams into its' chest, but he doesn't even dent him. He realizes that this robot is made of some sort of invulnerable metal. He punches it in the face, but it doesn't even phase it, he then tries his heat vision, still nothing. He flies into his mouth and destroys his flame thrower. He then locates the robot's control room and causes it to short circuit by punching a panel. He then starts tearing it up from the inside, and outside, Lois and Jimmy see the robot short circuiting, and the fireworks remind Lois of Independence Day. The robot starts to fall, and Superman flies back out of its' mouth and catches it, lifting it up and then dropping it into a nearby pond. Superman flies back down to Lois and Jimmy and asks them if they'd like to go back to Earth. He then flies them back to earth.

Later, in Metropolis, in Lois Lane's office in the Daily Planet building, Lois is reading the story in the newspaper. Clark tells her it's a lovely day. And he asks her if she'd like to take the rest of the day off. She then assumes that he's asking her to take a ride with him in the country. He then tells her he thought she might enjoy a visit to the zoo. She is disgusted, and she throws her purse at him, and he ducks.

The episode title refers to the Rigan robot, from the planet Riga, although the robot has very little to do with the plot of the episode, which is more or less about an alien race that captures humans to put in their zoo.

Retrieved from "https://superfriends.fandom.com/wiki/The_Robot_of_Riga?oldid=84177"
Community content is available under CC-BY-SA unless otherwise noted.