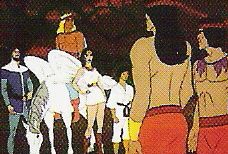 Responding to a distress call from a native tribe whose home is about to be obliterated by a volcano, the Freedom Force is surprised to encounter a giant robot that saves the day. But the man inside the robot, J. Quiggly Bent, has ulterior motives for his heroism, and the team must expose him before it's too late!

In the Valley of Time, Merlin magically summons other Freedom Force members Isis and Toshi. She tells Toshi to hurry, and that she'll summon Hercules. The three of them arrive at the Valley of Time where Merlin informs them that the small island of Borea is about to explode, which will kill the natives unless they take immediate action.

Meanwhile, the volcano is about to erupt in Borea, and the Chief of Borea states that they must save the Sacred black pearl. The Freedom Force arrives to lend assistance. The Chief tells them they must save the Sacred black pearl, but Isis doesn't think there is enough time. When all hope seems lost, a giant robot flies through the sky toward the island. It lifts a giant boulder and caps the volcano, but unknown to the Freedom Force and others on Borea, the robot stretches its arm down to a mechanical device inside the volcano, which is obviously the cause of the volcano, and with its' arm flicks a switch and stops the artificial volcano. The robot lands for all to see, and out from the head of the robot emerges a man, who descends slowly to the ground with some sort of anti-gravity belt. The Chief of Borea asks the stranger how they can repay him. He tells him he wants their sacred black pearl. But the Chief of Borea doesn't want to give it to him, because it is sacred to them. But the man tells him that their lives are much more sacred, and so the Chief of Borea agrees to give it to him. Isis asks what he would want with the sacred black pearl. And he tells her that where he comes from, in the 27th century, it's worth a fortune. He then asks her what she is doing here, noting that she herself doesn't belong in this time frame, since she is obviously from the 20th century. He asks them who they are, to which Hercules tells him "We are the Freedom Force." He tells him he's heard of them, but thought them only to be legends. Isis asks who he is, and he tells her he is J. Quiggly Bent, a time traveler, adventurer and hero. Isis tells him that real heroes don't ask for rewards. He tells them that he does. He then gets back to his robot and blasts off. The Freedom Force are very suspicious of him.

Later, while flying back to the Valley of Time, J. Quiggly Bent flies up to the Freedom Force in his robot. He tells them he just had an idea that they should join forces. Isis tells him he wouldn't like what it pays: Zero. But Merlin tells Isis that maybe they should give him a chance. And J. Quiggly Bent tells her that it would give them a chance to rest, since his robot is better than all of them. Hercules is angered by his comment and tells him that no one is stronger than he is, and that he should prove that his robot is so powerful. Bent accepts the challenge, and they land and Bent tells Hercules to lift the largest rock he can. He does so, but Bent wants to show that his robot is stronger, so he lifts a larger boulder, but it the process he strikes a rock-face causing it to crumble on top of him. Toshi mocks Bent telling him that if that's his best effort perhaps he should quit. But Bent is still adamant about proving he is better, so he challenges him to a race. Toshi agrees, and tells him it'll be to the mountain and back. He transforms into Super Samurai, and joins the race, to which Bent already has a head start at. But during the race, as they cross a rock bridge it collapses, and Super Samurai leaps over the gaping hole, but Bent and his robot fall and into the pond below. But just then, the volcano starts to become active again. The Freedom Force and J. Quiggly Bent race back to the volcano to stop it and Bent lands on top of the volcano, but an explosion sends him and his robot tumbling down the mountain. The robot is now damaged and it doesn't work. Lava continues to flow down the mountainside, and the natives of Borea try pry open the robot so they can save J. Quiggly Bent from being buried in the lava. Meanwhile, Super Samurai and Hercules diverts the flow of the lava with a with Hercules using his incredible strength to pull the ground apart, which Super Samurai was able to crack open with a karate chop. Isis uses her elemental powers to extinguish the lava. Merlin rescues some natives of Borea, and the day is saved. Later, J. Quiggly Bent tells the Chief of Borea that he doesn't understand why he saved him. He faked the first eruption just so he could get their sacred black pearl, and yet when the volcano really erupted they rescued him from certain death, rather than save their sacred black pearl. The Chief of Borea tells him that the people of Borea believe that the most valuable treasure is human life. Isis asks Mr. Bent what he will do now that his robot is destroyed. He tells her he will build another one, but this time the robot will collect knowledge and wisdom instead of treasure. Merlin then uses his magic to send Mr. Bent back to the 27th century. Isis wonders how his next robot will compare to them. Hercules tells her he might be able to build a machine faster, stronger and smarter than they are, but no man could ever build a machine as "lovely as you!" Isis is flattered, and tells him he may be right. Hercules then says: "Then again I may be wrong." Then everyone erupts with laughter.

Retrieved from "https://superfriends.fandom.com/wiki/The_Robot?oldid=89855"
Community content is available under CC-BY-SA unless otherwise noted.