The Return of Brainiac 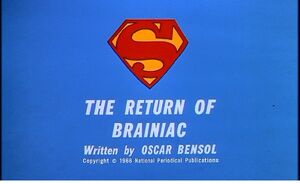 In outer space a flying saucer from the planet Mega is heading toward earth. On board the ship, is a computer in the form of a humanoid, who has the ability to shield himself with his awesome Ultra ForceShield, which can also give him the power of invisibility if needed. He is also armed with a Hyper-Ray, which he can use to shrink anyone he shoots with it down to microscopic size. As the ship enters the atmosphere, Lois Lane and Jimmy Olsen are taking a drive in her car, and are on their way back to the Daily Planet after an assignment. Jimmy sees the flying saucer and he thinks its' a meteor. Lois pulls the car over and they go to take a closer look. Lois instantly recognizes the ship. She realizes that it belongs to Brainiac. Jimmy is surprised. He thought that Superman got rid of him for good. They turn to run away, but they see Brainiac, holding them at gunpoint. Jimmy activates his signal watch.

In the offices of the Daily Planet. Clark Kent's super hearing picks up Jimmy's signal. He then transforms into Superman and follows the signal. Meanwhile, Lois and Jimmy are shrunk by Brainiac's ray gun. And Superman arrives and knocks the gun out of his hand. Just then, Brainiac turns himself invisible. Just then, Lois and Jimmy shout out to Superman and tell him to be careful not to step on them. Just then, Brainiac reappears and shrinks Superman with his ray gun. Superman takes flight toward Brainaic's head, but he slams into his force field, which causes him to fall back down. But Superman then notices that Brainiac's force field doesn't extend below his feet, so he lifts Brainiac and causes him to fall down, but then he drops the gun and the trigger stays pulled, causing it to blast the ray at them and shrink them even more so. Brainiac then rises up, grabs the gun and makes himself invisible again. Jimmy wonders where all the boulders came from, but Superman tells him that they are actually pebbles. Lois sees what she thinks is a tree, but it's actually the stem of a dandelion. And the blades of grass are the size of tree branches. Lois worries they'll be this size forever, but Superman tells her that he'll find Brainiac and get the ray gun back to return them to normal size. Lois asks Jimmy if he can see what's going on, but he can't, so he climbs to the top of the dandelion. But just then, Lois is attacked by an ant. The red ant then picks her up and carries her down its' ant hole. Jimmy activates his signal watch, because he sees Lois in danger. Superman, searching by Brainiac's ship, hears the signal and flies back to them, and flies down the ant hole to rescue Lois, who is about to be lunch for the insect. Superman grabs the ant and tosses it into a couple of other ants.

Returning to the surface, they meet up with Jimmy, and the loud footsteps of Brainiac can be heard. Jimmy tells Superman he's heading there way. Superman takes off to the sky, and seizes the opportunity to take the computer out. He uses his heat vision to fry his circuitry, and he falls to the ground, immobilized. Superman then grabs the ray gun and blasts it at them, causing them to return to normal size. Superman then destroys the ray gun. Lois is happy to see that Brainiac is finally gone for good. But Superman tells her not to be so sure, because Heckla could always build another Brainiac and send him back. Superman then flies to where the ship landed but finds it is gone. He was going to destroy it, but apparently Heckla sent for it by remote control. But he's sure it will be back again...with another Brainiac.

Meanwhile, back at the Daily Planet, Lois asks Clark where he had been all day. He then told her he was visiting with some "Aunts." That is, spelled A-N-T-S.

Retrieved from "https://superfriends.fandom.com/wiki/The_Return_of_Brainiac?oldid=84180"
Community content is available under CC-BY-SA unless otherwise noted.