Start a Wiki
A Filmation Series:
The New Adventures Of Superman 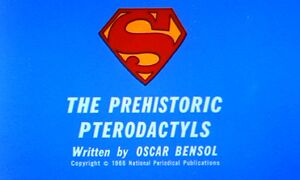 In the vast Frozen Arctic, an earthquake breaks an iceberg which sets free a Pterodactyl, which was frozen in suspended animation for millions of years. The giant beast spreads its' wings and flies off into the sky, heading southwest. Hours later, another iceberg crumbles, releasing another Pterodactyl.

Meanwhile in San Francisco, Clark Kent and Lois Lane, on a special assignment for the Daily Planet, are crossing the Golden Gate Bridge in Clark Kent's yellow car. They are listening to music on the radio when suddenly an announcement is made on the radio which interrupts the music stating that an aircraft carrier near Hawaii as sighted a giant flying monster. The carrier sent up a plane to track the monster. Lois tells Clark it sounds like an amazing story and she tells him to pull up to a phone booth so that she can call the Navy department for more information. After dropping Lois off at the phone booth, Clark tells her he has to get gas and he drives off and then he changes into Superman. He then heads west across the Pacific, toward the Hawaiian islands.

Meanwhile, near Hawaii, the aircraft carrier sends out the FP-1 to search for the flying monster. The pilot radios the aircraft carrier telling him he doesn't see anything. The Commander tells him to head back, because he just received a radio report that the monster was spotted over San Francisco. The pilot is surprised that it could have got there so quickly. But then he sees a monster in the sky and tells him he spotted it. The captain tells him to open fire, and the pilot does, and the missiles are too small to have any effect on such a large creature. He then is ordered to eject the plane, which he does, just as the monster bites down on the plane, causing it to crash into the ocean. Superman then arrives and flies down to the parachuted pilot, grabbing hold of him and telling him he won't need the parachute anymore. But then the monster heads straight for the ship below. Superman takes him down.

While below, the carrier is opening fire on the monster, but is unsuccessful at taking it out. Superman lands with the pilot and the Bumblebee commander tells Superman that he just heard that another monster was spotted over San Francisco. Superman tells him he'll take care of this monster first, and he then asks the commander if he can borrow their spare arresting cable. The commander grants him permission, then Superman takes it and uses it to lasso the monster's mouth shut. Superman then begins to fly the creature toward San Francisco where the other monster is.

Back in the city, at the phone booth, Lois is growing tired of waiting on Clark to get back, so she gets aboard a cable car. The driver then spots the Pterodactyl on top of the Golden Gate Bridge. A Coast Guard Cutter opens fire on the creature but misses. It flies off and lands on the cable car.

Meanwhile, Superman, getting closer to the city with his captive in tow, uses his telescopic vision to see that the other monster is sitting on top of the cable car that Lois is inside. Superman swoops down to attack the creature, but he is hit by the creature's beak, which sends him flying onto the ledge of a building. It tries to bite him, but Superman flies out of the way. He grabs the monster by the tail and throws him, then he sees a giant fishing net on the beach below. He grabs it and flies back toward the monster and catches it in the net. He now has both monsters in custody. He then flies them up into outer space to locate a planet for them where they cannot harm anyone ever again.

Back at the Daily Planet, Lois asks Clark where he's been, saying; "Where've you been? Another world?" He then tells her "You could say that."

Retrieved from "https://superfriends.fandom.com/wiki/The_Prehistoric_Pterodactyls?oldid=84171"
Community content is available under CC-BY-SA unless otherwise noted.