You may be looking for Teen Titans (TV Series). 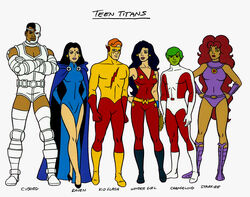 In 1983, Hanna-Barbera and Marv Wolfman began developing a new animated series based on the then-current version of the Teen Titans. It was "The New Teen Titans" and it was to follow the same universe of the Superfriends series.

Wonder Girl would be the leader. Robin was not going to be a part of the series since he was already part of the Superfriends. The show never saw the light of day, however an anti-drug commercial sponsored by Keebler was released that featured the Titans. Plus another member is shown called the Protector, who was a new superhero to be Robin's replacement because Keebler was unable to use the character, as he was licensed by Nabisco.

Their headquarters would have been the Titans Tower which was located on Titans Island, in the East River off the shore of Manhattan Island. This lair was more sophisticated and even had the shape of the letter 'T', which stood for "Titans."

Retrieved from "https://superfriends.fandom.com/wiki/The_New_Teen_Titans_(TV_series)?oldid=92260"
Community content is available under CC-BY-SA unless otherwise noted.