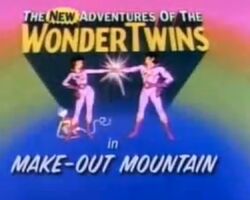 At a local deli called the Delicatesson, the Wonder Twins are about to enjoy lunch when all of the sudden a call comes over the Teen Trouble Alert. A man's voice then comes over the radio to inform Zan and Jayna that a teenage couple was parked on Make-Out Mountain when their brakes gave way, and the car is precariously balanced over a ravine. Zan tells him they'll get right on it. He then asks him where Make-Out Mountain is. He tells him it's just before Pregnant Point, next to Copperview Canyon. Zan tells Jayna that they have to save those kids from falling off the cliff, and Jayna tells him they also have to save them from becoming sexually active before they are mature enough to handle it. They activate their powers, Jayna forms of an eagle while Zan becomes water, and falls into Gleek's bucket.

They fly off toward their destination, but an eagle flies up behind Jayna, wanting to mate with her. Jayna evades the bird, but due to the bird delaying them, it takes them about 30 to 45 minutes before they actually finally reach Make-Out Mountain. Upon arriving, a police officer greets the Wonder Twins, and Zan apologizes that they took so long, since they got held up by an eagle. Jayna then aks where the teens are. The cop tell them that he suspects they're at the morgue by now.

Retrieved from "https://superfriends.fandom.com/wiki/The_New_Adventures_of_the_Wonder_Twins:_Make-Out_Mountain?oldid=67411"
Community content is available under CC-BY-SA unless otherwise noted.