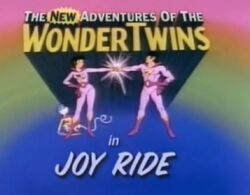 Previous Episode
Next Episode
The Death of Superman
Initiation

The Wonder Twins are playing ping pong at Pete's Ping Pong Parlor, when all of the sudden they receive a Teen Trouble Alert from Metropolis Airstrip, and a man's voice over Jayna's radio watch tells her that two teenage boys have stolen an airplane with a faulty engine and its' radio is dead and they have no way to warn them of the danger. Jayna then tells him they'll be right there. Activating their Exxorian powers, Jayna turns into an eagle and Zan turns into water, allowing Gleek to transport him in a bucket.

They then fly off and locate the two boys in the faulty airplane flying by the Coastal Mountains. Jayna tells them to bring the airplane down, but when the blond kid sees Jayna, he thinks she's a talking eagle, which completely freaks him out. The dark-haired boy who was the pilot, thinks that they must be tripping on acid or something, based on the fact that they must be seeing things...just then, the plane's engine fails and plummets earthward, Jayna takes the shape of a pterodactyl, and Zan attempts to take the form of something as well, but not before the plane crashes, and Zan says "Crap!", and so he turns into feces...Gleek then holds his nose because of the foul smell, and Jayna marvels at Zan's transformation.

Retrieved from "https://superfriends.fandom.com/wiki/The_New_Adventures_of_the_Wonder_Twins:_Joy_Ride?oldid=67408"
Community content is available under CC-BY-SA unless otherwise noted.