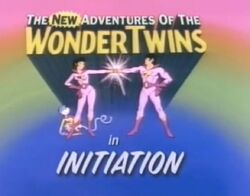 In a nearby lake,[2] the Wonder Twins and Gleek prepare for a campfire dinner, roasting sausages. Jayna then tells Zan; "If you ask me, these wieners are winners." Just then, they are interrupted by the Teen Trouble Alert. A voice over Jayna's watch says that a fraternity pledge went into Lonesome Pine Cave to take a picture of a bear, and he's disappeared and could be in trouble. Jayna then tells him they're on their way. Zan tells Jayna its' time for some Wonder Twins wonder-speed. And by speed he's not referring to drugs, he meant initiative.

They reach the cave in a matter of minutes, and they find the boy fleeing from the bear, and Jayna tells him that they'll have him out of there in a minute, they then use their Exxorian abilities and Jayna transforms into a gopher and Zan into water, and Jayna surrounds the bear with a gopher moat, but the bear just steps over it and tears the boy to shreds.

Later, at the funeral, Jayna tells Zan that they all learned a valuable lesson: "Initiation ceremonies are dangerous." Just then, Geoff's parents walk up to them and Geoff's mother tells her that she learned a lesson as well: Gopher moats cannot stop bears. But she tells them she already knew that...and that was their lesson, and thanks to them her son is dead. She then slaps Zan, Jayna and Gleek in the face.

Retrieved from "https://superfriends.fandom.com/wiki/The_New_Adventures_of_the_Wonder_Twins:_Initiation?oldid=67409"
Community content is available under CC-BY-SA unless otherwise noted.