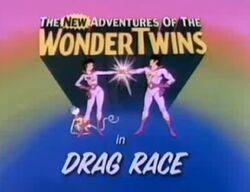 The Wonder Twins are playing golf at a local miniature golf course. Zan proves that he can't get a whole in one. Just then, a call comes in over the Teen Trouble Alert. They are informed that two teenagers are about to have a drag race at the 1st Street Factory District. The Wonder Twins then activate their powers. Jayna transforms into an eagle, and just as Zan is about to make his transformation into water, Jayna asks Zan why he is always wiggling his legs during the transformation. He tells her to "skip it!"

Meanwhile, at the Factory District, two cars are lined up ready to drag race, one boy asks the other driver if he's ready to lose. He tells him he's ready to win. The two cars speed off. While above the city, Jayna observes them below, and says its' too late, they are already dragging. They try to stop them by flying over there but the teenagers are freaked out by the sight of an eagle carrying a monkey. The teenagers in the red car then become so freaked that they drive the car of the road and the car is hanging over an excavation pit. Jayna turns into an elephant and Zan into an ice bridge, he orders all of the teenagers to get out of the car and cross the bridge to safety. The two girls and the boy exit the vehicle and proceed across the bridge, and one girl slips on the ice and falls off the bridge to her death. The boy is clinging to the icy bridge, which had no guard rails for him to hold onto. Immediately Zan transforms into a bridge with guard rails, but when the guard rails sprouted, they just knocked him off of the bridge. Gleek hides his eyes so he can't witness the horror. Zan tells the only surviving teenager from the car accident to stay calm, but when he starts talking, her foot gets caught in his mouth, and it sprains her ankle. Gleek jumps up and down as if he is apparently excited that they were at least able to save her.

Retrieved from "https://superfriends.fandom.com/wiki/The_New_Adventures_of_the_Wonder_Twins:_Drag_Race?oldid=67410"
Community content is available under CC-BY-SA unless otherwise noted.