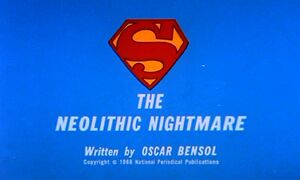 Taking a day off from the Daily Planet, Clark Kent, Jimmy Olsen and Beanie the copy boy are exploring the famous Breathing Cave near Metropolis. And a gust of wind blows through and surprises them. Clark explains to the boys that every few minutes the wind in the cave changes direction, hence the name of the cave. As Clark and Beanie head back toward the surface, Jimmy notices some strange rock formations in the cavern below, he goes down further to investigate it. But once he's down, he realizes he can't get back up, and he calls for Mr. Kent and Beanie. And just then he realizes he had forgotten his Superman signal watch. Just then, the wind changes direction again and pulls Jimmy deeper into the cave, and he falls down a shaft.

Meanwhile, at the surface, the two notice that Jimmy is gone. Clark tells Beanie to wait where he is, and he goes after Jimmy and reenters the cave. Meanwhile, deep underground, Jimmy is stuck in a pool of mud, and wonders where he has fallen to. Apparently he had fallen into some Prehistoric netherworld, which is a vast air pocket, deep within the Earth's crust. Jimmy starts to sink into the mud pit. But his feet settle on top of a Horned toad's head and it emerges from the mud. It then tries to eat him by grappling him with his tongue. Just as he is about to be eaten alive by the giant toad, he is grabbed by a Pink dragon.

Meanwhile, in Breathing Cave, Clark is searching for Jimmy, and he notices the shaft Jimmy climbed down, and at the bottom he find the breathing tube that Jimmy was pulled into with the cave inhaled. He takes off his disguise and becomes Superman. Meanwhile, below, Jimmy is being carried off by the dragon to be his meal, but he then sees a giant bird approaching him, the legendary Roc. The giant bird then engages the dragon in aerial combat, trying to steal Jimmy from the dragon so that he can eat him instead. Superman flies over toward the dragon and charges into him, causing him to drop Jimmy onto a giant spider web below. Just then, a giant spider crawls over toward Jimmy, and Jimmy fears this is the end. But Superman is on his way. But first he has to deal with the dragon and the bird. He grabs the dragon by the tail and twirls him around and slams him in between two trees, where it becomes ensnared there. He then faces off with the bird, who attempts to bite down on him but his teeth shatter thanks to Superman's invulnerability. He uses his Super Breath to blow him away. Superman then gets over to Jimmy and saves him from the spider just in time. The spider then attacks Superman but The Man of Steel grabs the monster and tangles it in it's own web. He tells Jimmy they should leave this world to the creatures that belong there.

Later, when Jimmy reaches the surface, Beanie asks Jimmy where he'd been. He tells him he was in another world and in lots of trouble but now he's safe thanks to Superman. Clark then arrives and tells Jimmy he was looking all over for him. Then he tells Clark the story, and Beanie tells him he must have been having a dream. But Clark said it sounds more like a nightmare to him.

Retrieved from "https://superfriends.fandom.com/wiki/The_Neolithic_Nightmare?oldid=84179"
Community content is available under CC-BY-SA unless otherwise noted.