Start a Wiki
A Filmation Series:
The New Adventures Of Superman

The Mermen of Emor 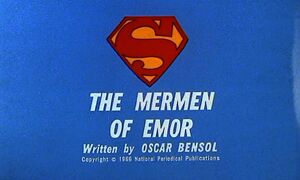 Clark Kent and Jimmy Olsen are on an assignment in Italy. While driving in a yellow car, they decide to take the day off and they go to a beach. While they are there the lifeguard tells them that many expert scuba divers have disappeared beyond the offshore reef. Jimmy assumes it may be a sea monster but Clark tells him it's just probably a strong undercurrent. Jimmy tells Clark that he wants to go for a swim, and Clark tells him he just wants to go for a walk, but he warns the young cub-reporter not to go anywhere near the reef.

Later, Jimmy is all dressed up in his scuba equipment, and decides that there might be a big story beyond the offshore reef. He dives into the water and locates an underwater cave. But inside the cave is a couple of Mermen with pitchforks. He then activates his signal watch just as the Mermen grab him.

Meanwhile, Clark Kent is relaxing at a nearby Seaside Cafe. But suddenly his super hearing detects the sound of Jimmy's signal watch. Clark could tell the signal was coming from the bottom of the ocean. He then asks the lifeguard, who was sitting at a table next to him with his girlfriend, if he had seen Jimmy. He told him he went scuba diving beyond the offshore reef, despite his warnings against it. Clark thanks the man for telling him, and he ducks into an alley and changes into Superman and heads toward the reef and plunges into the ocean. He finds Jimmy's frog boot, which had fallen off during his struggle with the Mermen, and he continues forward, seeing if he can pick up Jimmy's trail. He locates a tunnel that was next to the boot, and he dives down into it, and at the bottom he locates the legendary sunken city of Emor, a city inhabited by Mermen way under the earth's crust.

And inside the Emor Coliseum, Triton, King of the Mermen, eagerly awaits the start of this annual event, in which humans are endangered for the amusement of the audience. Jimmy and two other scuba divers are sent out into the arena floor of the coliseum. And the King orders the Lionsharks to be released. A giant door opens up and the Lionsharks swim toward Jimmy and the two scuba divers. Superman arrives in the nick of time, and punches all three of the Lionsharks, knocking them all out. Suddenly a cage sprouts up around Superman and the three young men. And out comes a Killer Whale as ordered by the King. The whale swallows Superman but Superman busts the monsters teeth and escapes his mouth, and then he grabs the monster and tosses it into the cage, wedging it between the bars. He then bends open the bars and flies through along with Jimmy and the others. The King's guard tells his King that Superman has broke through, and the King tells his guards to attack him. But Superman flies toward the tunnel that leads to the surface, and he plugs it up with a giant rock, so that they Mermen can never again bring humans down to their realm to harm for their amusement.

Later, Superman tells Jimmy to never try a stunt like that again, and he then flies off to fill in the tunnel just in case the Mermen find a way to get the rock out of their way. Jimmy tells the scuba divers that he's going to cable this story to Perry White.

Later, at the Seaside Cafe, Jimmy asks Clark if he thinks he'll win the Pulitzer prize for his story. But Clark tells him not to count on it, since it's nothing but a "fish story."

The episode title refers to the Mermen of Emor. The Mermen are the antagonists, led by the King Triton. And Emor is the subterranean city that was once a Roman seaport.

Retrieved from "https://superfriends.fandom.com/wiki/The_Mermen_of_Emor?oldid=86567"
Community content is available under CC-BY-SA unless otherwise noted.