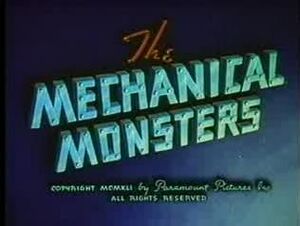 At the National Bank in Metropolis, a giant robot robs the bank. Extending its' wings, it flies off to the lair of the villain that invented it, a greedy scientist. The scientist collects the money that the robot had stolen and has the robot set back in a row of dozens of other robots.

Meanwhile, at the House of Jewels, extreme precautions have been taken to prevent the Mechanical Monster from stealing the jewels from the exhibit. A large battalion of police officers armed with Tommy guns stand at the ready. Clark Kent and Lois Lane are covering the story of the jewel exhibition, when just then, one of the Mechanical Monsters crashes into the exhibit. The police force begin firing their machine guns, with no effect. They have no choice but to let the monster enter the exhibit, or be trampled. Instantly the giant mechanical beast starts loading up the jewels into an open compartment in its' back. While Clark is phoning in the story in a nearby phone booth, Lois jumps inside the back of the robot to stowaway inside and find out who the inventor of the Metallic Monster is. It then takes off into the sky. Clark then changes to Superman, and flies after it, and lands on the monsters' back, and begins pulling at the door to get to Lois, whom he had spotted with his X-Ray vision. But at the lair of the greedy scientist, an alarm goes off informing him that there is interference, so he presses a button which causes the monster to flip over upside down thereby tossing the Man of Steel into telephone lines below, and also dumping the jewels, and almost Lois in the process, but she manages to hang on.

The robot arrives at the scientist's lair, with Lois hidden inside. When he dumps the robot's compartment, he finds only Lois, and wonders what happened to the jewels. She tells him he can read all about it tomorrow's newspaper. He then begins to get violent, and he asks her in a more firm voice: "Are you going to tell me what happened to those jewels?!"

Meanwhile, back at the telephone lines, Superman is all tangled up, but with his super strength, he breaks free and follows the trail of jewels to the lair of the scientist. There, Lois has been suspended over a giant vat of molten metal, and the scientist begins lowering her into the molten metal, trying to force her to tell her where the jewels are, using torture as a persuasion for her to talk (having rather unintuititvely gagged her, however). But just then, Superman smashes through the door. The scientist then activates all of the Mechanical Monsters and makes them attack Superman. They pound him, blast fire at him, but they are no match for the might of the Man of Steel. He takes them out with ease, and tosses them all across the room. But the scientist tells Superman if he takes another step toward him then Lois is doomed. He then cuts the rope, and Lois falls toward the molten metal, but Superman catches her. Then the scientist pulls a lever which causes the vat of molten metal to tilt over and spill out on top of Superman and Lois Lane. Using his body and his cape, he protects Lois from the molten metal. Then the scientist realizes there's no hope for victory, so jumps into the molten metal with the intent to commit suicide, but Superman catches him before he can be fried.

The scientist is jailed, and millions of dollars in jewels are recovered. Meanwhile, at the Daily Planet, Clark Kent compliments Lois Lane about her wonderful story she wrote, and she says that she owes it all to Superman.

Retrieved from "https://superfriends.fandom.com/wiki/The_Mechanical_Monsters?oldid=78369"
Community content is available under CC-BY-SA unless otherwise noted.