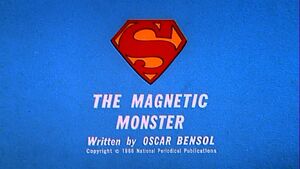 Setting
Metropolis County, 1971
Previous Episode
Next Episode
The Return of Brainiac
The Toys of Doom

In the sky, an Air Force Weather balloon is soaring into the sky, while hovering above it, is a rocket from Deimos, a moon that orbits the planet Mars. On board the ship are two members of a warrior race known as the Deimosians, who are determined to conquer the planet Earth. They test their newest weapon, which they launch from the rocket and send it off toward the weather balloon. It then melts the weather balloon with it's incredible magnetic powers. Meanwhile, an Air Force plane is in flight, and the device magnetizes to it's wing. The Pilot is surprised to see that his wing changed shape as if it melted. It spirals earthward.

Meanwhile, Lois Lane and Clark Kent are covering a story at the Metropolis County Fair. Lois tells Clark she's going to drive back to Metropolis in her car and she asks Clark if he could use a lift, but he tells her to go on ahead. Just then, a man catches sight of the plane falling going down. Clark uses his telescopic vision to see the device attached to the wing. He darts away, and unseen, he transforms into Superman. He catches the plane and he can't help but notice that it feels like rubber. He brings it to a landing and asks the pilot what happened to his ship. The pilot is baffled, but Superman knows that it must be the device that was attached to the wing that caused it to happen. He takes off into the sky to see if he can locate it.

Back on board the alien ship, the two aliens are happy to see that the device tested out positively. They reactivate the targeting scanner, and the device attaches itself to a locomotive. The Engineer watches helplessly as the device attaches itself to the engine. Superman spots it, but not in time, it causes the train to explode. Superman continues his pursuit after the mechanical device. Superman grabs it, just as it is about to attach itself to a crane, but it's power was far greater than he anticipated, and it destroys the crane as well, and Superman is unsuccessful at saving it. Superman tosses it, into the sky, aiming for the river, but the aliens activate the emergency stabilizers. It flies toward a suspension bridge. Lois just happened to be on that bridge since she was returning to the city. The bridge starts to melt. Superman grabs Lois's car and sets her down to safety. Superman tells her he's going to destroy the gadget, just as he flies off after it, Lois decides that she can phone the story in to Perry White from a nearby Forest Ranger Tower. Superman grabs the device, gives it a super-punch, and it smashes to pieces, but it puts itself back together again. The aliens are amazed at how well their device works, and they decide to let it seek out one more target. The device heads straight to the tower that Lois went to call Perry White in. It attaches to the tower, but Superman saves Lois, just as the tower collapses. It then attaches itself to Lois's car, Superman then starts to fly it into space to attach it to a meteor, but he comes into the path of the Deimosian ship, which he recognizes from his previous encounter with other members of their race. He then attaches the marauder to their ship.

Inside the ship, they are terrified that the ship will be destroyed. Superman then decides to take them back home, so he grabs the disfigured ship and flies off at super speed and returns them to Deimos, and gives them a stern warning to never try and take over the earth again.

Later, at the Daily Planet, Lois tells Clark of her terrible encounter with the alien device. Clark asked what caused all of the disasters and she said that according to Superman, it was some kind of crazy magnetic gadget. She then goes on to ask why does all of these crazy things always pick on her. Then Clark says that he guesses it's because she has such a magnetic personality.

The title refers to the Deimosian's powerful marauder.

Retrieved from "https://superfriends.fandom.com/wiki/The_Magnetic_Monster?oldid=84181"
Community content is available under CC-BY-SA unless otherwise noted.