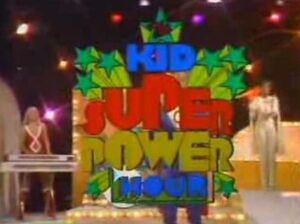 The Kid Superpower Hour with Shazam! series, which aired in 1981 on NBC Saturday mornings." It was made by Filmation Productions and it was a whole hour.

These cartoon segments are interspersed with live-action segments[1] that introduced the music and joke telling of the rock group hero-high.

From time to time the characters of one show would appear in the other. Isis from The Secrets of Isis also made a guest appearance in animated form on Hero High.

The Hero High segment focused on the adventures of super powered teenagers in high school that are learning how to be superheroes. They have all the typical teenage activities, rivalries and events, but modified for their powers and skills.

The companion segment, Shazam!, focuses on the adventures of the Marvel Family.

This version of Captain Marvel stayed true to its comic roots. Billy Batson was a boy broadcaster who works with his twin sister, Mary Batson.

Together they were given the powers of six great gods and heroes and whenever they say the name of the ancient wizard, "Shazam", they are transformed into the mightiest mortals. So amazing and sudden is the change that most people don't even realize what has happened.

Billy draws on the power of:

Mary draws on the power of:

Billy and Mary Batson and their friend, Freddy Freeman, are ordinary kids who have a wonderful secret and a great responsibility – to battle the sinister forces of evil. For Freddy to transform into Captain Marvel Jr., he must say the name of his favorite superhero, "Captain Marvel" to call the magic lightning. Together with Billy and Mary, they fight the threats to the world.

When Filmation had this idea, they wanted to use the Archie characters & title it Super Archies (Punk Rock & Misty Magic would've been the outside characters). But they lost the rights to Archie, they had to restructure the show.