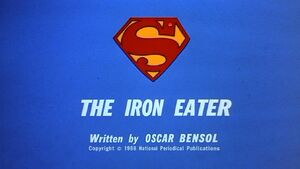 Setting
Metropolis, 1971
Previous Episode
Next Episode
The Toys of Doom
The Ape Army of the Amazon

A meteor from a distant galaxy lands on Earth, on the outskirts of Metropolis, there, the rock starts to crack open and a monster escapes. This particular monster has an appetite for iron and steel, he spots some railroad tracks and begins snacking on the metal, but then a bear approaches him, and he is alarmed, and just then the alien creature transforms itself into an exact replica of the bear. The bear then leaves the presence of the creature, and then the creature shapeshifts back into his original form and walks away, leaving the train track broken, and later a Railroad track walker finds where the railroad tracks were broken, he begins waving his lantern in the air, trying to signal the train to stop, but the train is moving to fast.

Aboard the train, are Clark Kent and Lois Lane, returning from an assignment. Lois then sees a lantern waving when she looks out the window, Clark uses his telescopic vision to see that the railroad track is destroyed. Clark sneaks away and turns into Superman and runs outside and grabs the train and lifts it up over the break in the track.

Later, he asks the track walker what happened. He tells him that he wasn't sure, but somehow the tracks were torn apart. Superman asks if he had seen any suspicious characters around, and he points to the grizzly bear, telling him he's the only one he's seen. Superman then flies back to the train, and as he leaves, the "bear" takes his original form. He wasn't the bear at all, it was the alien monster. He then heads toward Metropolis.

The next day, in the parking lot of the Daily Planet, Lois is impatiently waiting in Clark's car for him to join her so that they can go on an assignment together, but just then, the monster attacks her. The monster begins eating away at the car, completely devouring the driver's side. The creature then starts to cry for some reason and then quickly runs off, Clark then approaches wondering what happened to his car and Lois tells him what she saw. She tells him that the creature ran off through an alley.

Meanwhile, in the alley, a street sweeping man is sweeping away, when all of the sudden he catches a glimpse of the approaching monster, and he runs away. The creature then takes the shape of the man. Clark sees the monster, thinking he's the street sweeper, and he asks him if he's seen a monster. He shakes his head. He then heads back to Lois.

Later, the creature comes across a skyscraper under construction and begins feeding on the metal frame. A police officer then is walking toward the construction site, whistling merrily, and the creature spots him and turns into a cop. Once the cop spot's the monster, he waves his nightstick at him and passes him by.

Inside the Daily Planet, Lois tells Clark that today is the first opening of the new Metropolis Bridge, and Perry White is going to cut the ribbon. She asks Clark if he's coming with her but he tells her he's busy. She leaves his office, then Clark looks out the window to see that the building under construction is falling over since the monster was munching on it. He changes to Superman and flies out to catch it, and grabs a beam to replace the damage part of the building. He sees the police officer and asks if he had seen any unusual characters around, and he told him he only saw another policeman, but he just realized that the cop he had seen looked exactly like him. Superman finally realizes what's going on. He now knows that the character he's looking for is a shapeshifter.

Later, in the Daily Planet, Lois reads the headline of the newspaper to Clark, telling him what a clever headline it is:

The title of the episode refers to the antagonist, an iron eating alien monster from another galaxy.

Retrieved from "https://superfriends.fandom.com/wiki/The_Iron_Eater?oldid=84183"
Community content is available under CC-BY-SA unless otherwise noted.