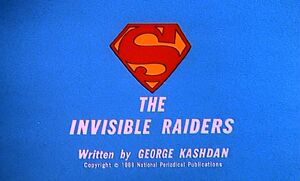 Setting
Metropolis, 1971
Previous Episode
Next Episode
The Robot of Riga
The Neolithic Nightmare

A new exhibition has opened up in the Metropolis Museum, bringing in thousands of spectators. Clark Kent and Jimmy Olsen are covering the story of the display of old relics. Just then, a hovering head appears in the room. He tells everyone to remain calm and stay where they are, and no harm will come to anyone. He tells him that his Hooded Hirelings only wish to remove the treasure from the museum. Just then, the Guard tells them to hold it, and he points his gun at them. Just then, the hovering head tells the guard that mere guns cannot scare: "The Sorcerer!" He then fires energy blasts from his hands which melt the gun. Helplessly everyone watches as the hooded men loot the displays. Clark Kent then sneaks off to turn into Superman. He returns and tries to stop them, but every time he's about to grab them, they turn invisible. The invisible men then grab Jimmy. The sorcerer then tells Superman not to try and follow them, or he will never see Jimmy alive again. Superman helplessly obeys.

Later, in the Sorcerer's cavern lair, Jimmy tells the Sorcerer he may be smart, but he can't stop Superman. The villain tells Jimmy that as long as he's his prisoner he can. He orders his hooded men to tie him up. But unseen by the villains, Jimmy manages to activate his signal watch.

Superman is able to hear the signal with his Super hearing. He follows the signal to the cavern, and there he faces the Sorcerer. Immediately when the Sorcerer sees the Man of Steel he makes himself invisible. Sorcerer's minions also turn invisible, and they grab some guns and start shooting at Superman. His invulnerability allows the bullets to deflect off his chest. The Sorcerer tells them to drop the weapons because they are giving their positions away. Superman punches the villains and they eventually become visible. Superman beats them up to the point that they are knocked out. He then flies over to the Sorcerer and punches him, causing him to hit the floor. He tells him there's nothing like a few Super-blows to break a spell. He orders him to tell him where Jimmy is, but the villain does not cooperate. Superman uses his X-Ray vision to scan other parts of the cave and he locates him. He smashes through some cave walls and tunnels his way to Jimmy. He asks Jimmy if he's all right, then he tears the ropes that were binding him. Jimmy says he's fine, but the Sorcerer is getting away. Superman races outside of the cave to confront the Sorcerer. The Sorcerer uses his magic to create and earthquake to swallow up every living thing. Superman drills down into the earth and finds the focal point of the eruption, and stops it with his bare hands. He then flies back up the hole and grabs the Sorcerer, capturing him.

Later that day, at the Daily Planet, Jimmy tells Clark they had quite an adventure. Jimmy then asks Clark if he'd like to see a magic trick. But Clark tells Jimmy "No thanks." And he goes on to tell him that magic baffles him.

Retrieved from "https://superfriends.fandom.com/wiki/The_Invisible_Raiders?oldid=84178"
Community content is available under CC-BY-SA unless otherwise noted.