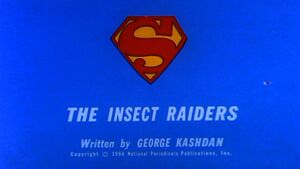 On a quiet night in the Atlantic, a Freighter heads toward Metropolis Harbor. When suddenly, several giant insects flying through the night sky shine blinding lights down on the captain and the first mate. In then a man in the radio shack sends out an S.O.S. to Metropolis. And not long later Superman flies toward the scene. They blast arrow projectiles from their noses which bounce harmlessly off of the Man of Steel's invulnerable body. Superman grabs one of the creatures by the wings. But then, someone shouts out to Superman that the bugs are trying to sink the ship with their nose stingers. They puncture the hull of the ship, and water rushes in. Superman dives in the water, and using his super strength, he lifts the freighter out of the ocean and flies it toward the city.

Later, the Insect Raiders return to their nest. Now we learn that the so-called insects are actually humans dressed up in some advanced insect costumes. The leader of the insects tells the others that they are idiots, blaming them for their failure at the freighter. But one of them tells him that it wasn't their fault that Superman showed up. The leader then tells them that they'll have to learn Superman's weakness.

Later, one of the insect raiders lands on a ledge of the Daily Planet building, making the sound of a cricket, which Jimmy Olsen can hear from inside the building. He looks out the window, and the insect raider grabs him, and pulls him out onto the ledge and shoots him with a cocoon gun, which is a gun that entangles him in a cocoon. As he yells for help, the super hearing of Clark Kent allows him to realize that Jimmy's in trouble, so he darts away and changes into Superman, and races to save Jimmy, who is being carried away by the insect raider in flight. He uses some sort of sonic waves to send out massive vibrations which causes a statue of Thomas Jefferson to fall over, with many natives of Metropolis below about to be crushed to death. Luckily, Superman catches the statue and sets it down. He then goes back to his pursuit of the insect raider who has kidnapped Jimmy. Superman crashes into the Insect Raiders Headquarters, and the leader tells him: "Come into my parlor said the spider to the fly!" Superman demands to know where Jimmy is, and that if he has harmed him he will dearly regret it. He tells Superman to look through the wall next to him, so Superman uses his X-Ray vision to see that Jimmy is all tied up sitting on giant eggs loaded with explosives. Superman is starting to get real angry, but the villain tells him not to move, because if he does, the slightest vibration could set off the explosives. The leader of the raiders puts on his helmet and tells Superman not to follow while they make another raid, otherwise he'll set of the explosives by remote control. Superman knows he can't bash through the wall or else he'll set off the explosive eggs. So he goes outside and flies up to the roof and spins around at super speed and burrows through the roof and the spins around again, creating a suction force which pulls the eggs up gently, without Superman needing to touch them. This still makes Jimmy nervous though of course, because its' still explosives after all. As the eggs lift up into the air, Superman punches them all, exploding them. He then flies down and rips Jimmy's cocoon. He then tells Jimmy to take a bus home. And he then goes back to pursuing the insect raiders.

Meanwhile, the insects are targeting a Squadron of Transport Planes. Superman then comes after them, and they begin to attack him, shooting him with their nose stinger guns that shoot arrows. Superman is unaffected. Some of the insects charge into Superman, but they only end up smashing their heads into Superman's invulnerable body, and fall to their deaths. One of the insect raiders blasts a cocoon at Superman with his cocoon gun, but Superman rips out of it with his super strength. He then grabs the gun and shoots them with it, putting them all in a large cocoon then he flies them all off to the Metropolis Jail.

Later, at the Daily Planet, Jimmy tells Clark Kent the adventure he had, and Clark asks him if he seriously wasn't a bit frightened when he was inside the ant chamber. Jimmy tells him he wasn't afraid at all, because he's got Superman as a pal. Clark tells him it's nice to hear him say that.

The episode title refers to the antagonists of the episode, which were a group of supervillains called the Insect Raiders.

Retrieved from "https://superfriends.fandom.com/wiki/The_Insect_Raiders?oldid=87352"
Community content is available under CC-BY-SA unless otherwise noted.