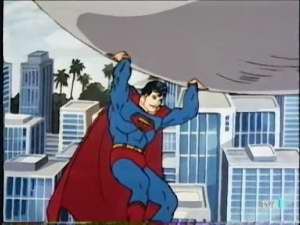 Clark Kent goes on a holiday with his parents, but must leave as Superman when General Zod and his Phantom Zone companions Ursa and Faora create a creature known as the Hunter. The Hunter can transform into any material he wants and transforms into steel in order to kidnap Lois Lane. The Hunter then transforms himself into Kryptonite and apparently kills Superman. Superman, however, is only in a Kryptonian trance,[1] and Lois Lane awakens him. Superman destroys the Hunter and uses the Phantom Zone projector in order to send General Zod back to the Phantom Zone.

Retrieved from "https://superfriends.fandom.com/wiki/The_Hunter?oldid=53422"
Community content is available under CC-BY-SA unless otherwise noted.