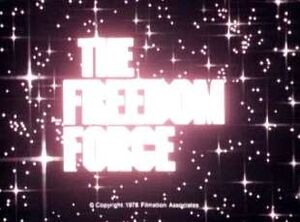 The Freedom Force is a 1978 animated television series produced by Filmation and aired on CBS as a segment of Tarzan and the Super 7. It showcased a superhero team from various time periods and geographical locations. They were gathered by the heroine Isis from around the world to help fight evil. Isis had previously appeared in the live-action television series, The Secrets of Isis, although the actress who portrayed her, Joanna Cameron, did not reprise the role for the cartoon.

Only five episodes of the series were produced. This show was a spin-off of Space Sentinels (1977), which also featured the character of Hercules. In turn, The Kid Super Power Hour with Shazam! (1980) was a spin-off of this series, as Isis appeared in that show as well.

BCI Eclipse LLC (under license from Entertainment Rights) released all 7 episodes of Freedom Force on DVD in Region 1 on August 22, 2006, along with all 13 episodes of Space Sentinels, an earlier series that featured several of the same characters. The digitally-remastered presentation features scripts and Spanish language tracks for all 5 episodes, a gallery featuring original images, early presentation images, trivia and interviews with creators Lou Scheimer, Buzz Dixon, Darrell McNeil, Michael Reaves, Robert Kline and David Wise, as well as numerous special features related to Space Sentinels and Filmation in general.

In addition, a single episode, "The Plant Soldiers", was included as a bonus feature on the DVD release of the live-action The Secrets of Isis series.

Retrieved from "https://superfriends.fandom.com/wiki/The_Freedom_Force?oldid=91665"
Community content is available under CC-BY-SA unless otherwise noted.