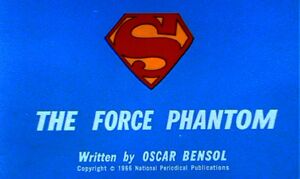 Setting
Cape Kennedy, 1971
Previous Episode
Next Episode
None
The Mermen of Emor

Filmation's The New Adventures of Superman begins with this episode which is about an alien creature that attacks earth.

At a space base in Asia, a beam of energy blasts down from outer space, taking the form of a strange monstrous energy creature. Instantly the giant phantom attacks the base and destroys one of the base's rockets, completely breaking it in half.

Meanwhile, at the Daily Planet, Perry White tells Clark Kent that another space base was destroyed in the Middle East. The second one of the day, the first one being in the Far East and the second in the Middle East. Perry then receives another report of another space base being attacked in North Africa. They then realize that whatever it is, it's heading westward, towards America. Clark Kent then leaves White's office and heads toward the storage room to change into Superman, realizing that Cape Kennedy could be next.

Meanwhile, high above Cape Kennedy, a large rocket ship from the Martian moon of Deimos is orbiting earth. On board the ship, is the crew, a Deimosian captain and his Lieutenant. The Lieutenant is ordered by his captain to activate the ray that sends down the Phantom Creature. Instantly the creature is beamed down to Cape Kennedy, where it begins attacking the base. It picks up a large rocket ship and tries to destroy it, but Superman spots the creature from above and flies down and grabs the rocket away from it. He sets down the rocket but the creature runs up and smashes it with his right fist. Superman flies up to the creature, but it stomps Superman into the ground with his foot. The creature then turns his attention to a nuclear missile. Superman flies over to stop him. Superman lands on the missile before the monster can get to it, and he punches the creature in the face with all of his massive super strength.

One board the space ship, the two aliens watch on a view screen as the Man of Steel approaches their ship. The Lieutenant is amazed to see a man that can fly. The captain orders him to put the force creature on guard duty outside of the ship, and to turn the generator on full power. Instantly the monster appears outside of the ship, and Superman flies in to do battle with it. The creature grabs a meteor and throws it at Superman, and Superman crashes into it at super speed, and the meteor explodes into pieces. Superman continues toward the creature, and the aliens continue to watch with amazement. The Lieutenant asks if anything can stop him, but the captain has confidence that the creature will stop Superman. Superman strikes the creature, but it barely effects him, since the generator is almost up to full power. The creature then punches Superman, who is sent flying backward an incredible distance. The force puts Superman in a daze, and the power of this creature amazes even Superman. He flies toward the creature again and the creature punches him again. Superman is dazed, but he recovers quickly and attacks the creature yet again, giving the creature the "Old one-two" punch. The creature grabs Superman with clapped hands. This starts to cause the generator to overload. The Lieutenant tells the captain they must shut down the creature, but the captain tells him to leave it on, because they must conquer the universe! The captain tells the Lieutenant to turn up the creature to full power. The Lieutenant protests, but he orders him to do so. The monster gets bigger, and Superman is somewhat scared of its' power, he then zooms toward it at super speed, and then, using his heat vision he blasts the monster, and the overload caused the entire ship to explode. Superman is amazed by the force he just fought, and he hopes the Deimosians never send another ship like that again. He then flies back down to earth.

Back in Metropolis, at the Daily Planet, Perry is impressed with Clark Kent's story, and he asks if Kent was ever personally in danger when the monster appeared. He told him he wasn't really, but for a moment he was in a "tight squeeze."[1]

This is the first time we see the Earth-1A version of Superman and Perry White. Both of them reappear in episodes of the Superfriends, although Perry only appears in one episode.

The title of the episode refers to the Force Phantom, an artificial lifeform created by the antagonists: the Deimosians.

Retrieved from "https://superfriends.fandom.com/wiki/The_Force_Phantom?oldid=84169"
Community content is available under CC-BY-SA unless otherwise noted.