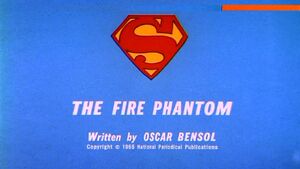 Setting
Metropolis countryside, 1971
Previous Episode
Next Episode
The Ape Army of the Amazon
The Deadly Dish

In the peaceful countryside near Metropolis, clouds of smoke are coming out of an coal mine. Emerging from the smoke is a walking flame, a Fire Phantom from the center of the Earth. It catches fire everything it touches.

Ten miles away, Clark Kent and Jimmy Olsen are camping out after a long day of fishing. They get in their tent to and Clark lays down in his bed. Clark tells Jimmy he better get to sleep too if he wants to get an early start in the morning. Jimmy tells him he needs to take a walk first. Jimmy walks outside of the tent and takes a look at the star-lit sky in the countryside. He then notices in the distance a forest fire. Jimmy decides he wants to go and check this out, and cover the story himself. He takes off in Clark Kent's yellow car. Inside the tent, Clark can hear the car starting and taking off with his super hearing, but he just assumes that Jimmy is going to do some moonlight fishing.

The fire phantom continues to burn everything in its' path, setting fire to everything it touches, including a highway road sign with Smokey Bear. The fire phantom continues, walking through the forest a burning everything in its' path. Jimmy continues driving toward the fire, and he notices the walking fire phantom. He bails out of the car and runs off, knowing he wouldn't be able to turn the car around in time before being consumed by the fire, but now he sees that the fire has spread so much so that it is behind him as well, and he is not trapped in the inferno. And he realizes that he left his signal watch in the tent.

Back at the tent, Clark is awakened by the smell of smoke. He darts outside, and sees the forest fire, and he knows Jimmy is out there somewhere. He quickly transforms into Superman and leaps into the air in flight. Using his telescopic vision, he spots Jimmy down below, and a burning tree is about to fall on top of him, but Superman catches it, stopping it from crushing Jimmy with his super strength. He pulls Jimmy out of the path of the fire and takes him over to a creek and puts him in the water under a small bridge, and he tells him to stay there. He then flies off and smashes his way through trees, creating a blockage for the flames. Soon, the fire phantom crosses the bridge that Jimmy is hidden under. Jimmy is no longer safe, and he swims away and gets out of the creek. The fire phantom approaches the camp site, and the tent is burnt. There, Superman faces the phantom for the first time. He uses his super breath in an attempt to put it out, but the creature dodges the blast of his breath by making a hole in himself. He then tries to beat it out, but he is unsuccessful. He then flies off to find another way. He approaches a pond and he plows into the ground to direct the water to flow toward the creature to snuff him out. After the creature is taken out, Jimmy asks Superman if that fire creature was some kind of devil or something. He tells him he's just a Fire phantom from the center of the Earth.

Back at the campsite, Jimmy is looking at everything that was burnt in the fire. Clark Kent then walks up to him and Jimmy asks him where he's been. Clark told him he smelled smoke so he just ran off and hid in a cave. Jimmy tells him he's lucky, because he just went through a terrifying experience, and just thinking of it gave him a chill. Clark then tells him if he feels a chill he better build a fire. Jimmy tells him "No way!"

The title refers to the antagonist of the episode: The fire phantom. Phantom is another word for Ghost.

Retrieved from "https://superfriends.fandom.com/wiki/The_Fire_Phantom?oldid=84185"
Community content is available under CC-BY-SA unless otherwise noted.