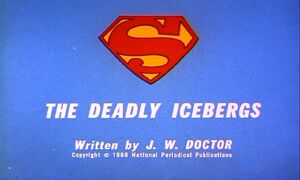 Setting
Arctic Ocean; Atlantic Ocean, 1971
Previous Episode
Next Episode
The Chimp Who Made It Big
The Robot of Riga

Somewhere in the Arctic, a group of hooded men use a laser gun to cut away icebergs, but these are no ordinary icebergs, they are engines. One of the hooded men says that there's enough explosions on one iceberg to blow a ship to smithereens. Another hooded man says he hopes the electromagnets are strong enough, and the first hooded man tells him not to worry, because the icebergs will "Go to her like a homing pigeon."

Meanwhile, in the Atlantic, the Gigantic, the first Atomic passenger liner is on its' maiden voyage. Clark Kent and Lois Lane are both on board. Lois tells Clark she heard a rumor that the ship was carrying some sort of top secret cargo. She then goes on to tell him that this is one instance that she thinks she'll probably be wishing that he is Superman.

Meanwhile, in a Arctic shack, headquarters of the Hooded Men, they are planning phase two of their operation. Their plan is to pull the Gigantic north off-course into the path of the icebergs. The leader of the hooded men tells Sparks to send a false S.O.S. just as he wrote it down on a piece of paper.

Moments later, the Gigantic responds to the fake S.O.S., and moves at full speed to the path of the icebergs. On board the ship, Clark tells Lois he thinks the S.O.S. is a phony, because the S.O.S. is coming from a location that's far away from any shipping lane. Lois is not so sure but Clark tells her he wants to see for himself. But she asks him how he could do that, asking him "Who do you think you are? Superman?" Clark then leaves, and Lois begins to suspect that he just might be Superman, but she quickly dismisses the thought. Clark slips away and changes to Superman and flies over toward the location.

While back at the hideout, the villains watch their sonar and see that the ship is approaching and when it does they'll be able to collect a million dollars worth of gold. Just then, Superman arrives at the location the S.O.S. supposedly was coming from. Superman then realizes that there's no sign of any ship, and therefore the distress signal was a fake. He then searches for the source of the fake signal.

Back on the ship, the Gigantic's first mate informs the captain that they are heading toward a collision with icebergs. The captain orders the helmsman "Hard to starboard!" The captain orders all passengers and crew to head to the lifeboats. Lois is banging on Clark's cabin door, but he won't answer, but she assumes he already got to a lifeboat, and she really wishes Superman were with her.

Superman then locates the shack with its' radar and transmission tower. He then crashes through the roof and knocks the three of them out by knocking their heads into each other. He then flies off realizing that according to the radar there's little time to save the ship. He carries the three of them along with him.

Back at the ship, the icebergs are still on a collision course. The helmsman can't get the controls to respond. Lois asks a passenger who is with a woman if he had seen Clark anywhere. The man tells her to forget about him, because in a few moments everyone was going to die.

Now Superman, carrying the villains, is flying over the scene, watching as the icebergs are about to crash into the ship and he uses his X-Ray vision to observe that there is dynamite inside the icebergs. He also deduces that the ship is being drawn to them by electromagnetic force. He flies down to the ship and Superman tells the captain to trap the bad guys and iron then he leaves and lifts one of the icebergs into the air and tosses it into another iceberg. The third one is still on course for the ship and so Superman flies down and grabs the ship and flies it over the iceberg. He then flies into the iceberg and the detonates the dynamite manually. He flies back in the ship and changes back to Clark Kent and grabs some life savers. Lois noticed that Clark is never around when Superman is and vice versa, and so she asks him why, Clark tells her he wouldn't believe her if he told her.

The title refers to the icebergs that the Hooded Men set to crash into the Gigantic.

Retrieved from "https://superfriends.fandom.com/wiki/The_Deadly_Icebergs?oldid=84176"
Community content is available under CC-BY-SA unless otherwise noted.