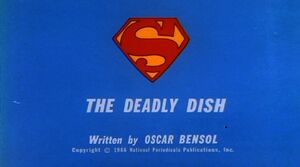 A passenger jet approaches Metropolis Airport, facing the possibility of a potential disaster. The pilot radios the control tower to inform them that their landing gear is stuck, but just then, the co-pilot notices something flying of in the distance, at first, they mistake it for a bird or a plane, but they soon realize it's actually Superman. Superman then brings the plane down to safety, but it takes all of the super strength he has just to do a task which ordinarily would be fairly simple for him. He can't help but notice he's getting weaker. After the incident, one of the Airport employees congratulates Superman telling him he did good job saving the plane. Superman thanks him, and he wonders what caused him to be weak temporarily.

Later at the Daily Planet, Luthor is in disguise as a man who is presenting an award for best newspaper to the staff of the Planet. Clark Kent isn't present. He shows them the trophy, but it's actually a gas sprayer which sprays mind control gas. Lex then removes his fake beard and wig, revealing his identity. He then tells Perry White that tomorrow at noon to stand in the middle of Oak Road facing north. He tells Jimmy Olsen to go to Pier 41 and at 12:07PM, he is to climb onto a piling. He then tells Lois Lane that tomorrow at 12:10PM, she will enter Apartment # 2A at 37 Pine Street, and then at 12:13, she is to climb out on the ledge of the window. He then tells them when he snaps his fingers, they will awaken from their trance, unaware that they have been put under a spell. He does so, and he puts his disguise back on and they snap out of it, and he presents the award to them and White thanks him.

The next day, in Clark Kent's office in the Daily Planet, Clark receives a telephone call from the Metropolis Police Department asking if he knows how to get in touch with Superman. He tells him he may be able to. He then asks him why, and he tells him because he received an anonymous tip that three of Superman's friends will be killed around noon. He tells the cop he'll try to get in touch with Superman, and he then hangs up the phone. He then turns into Superman. He flies to the top of Metropolis Clock Tower to look around for his friends, while at Luthor's hideout, they prepare the transmitter so that they can destroy Superman. Superman locates Perry with his telescopic vision, and sees that he's about to be ran over since he's in the middle of the street, but as he attempts to rescue him, he feels weak because of the Kryptonic waves. Superman swoops down and stops Perry from getting ran over by a radio-controlled steam roller. Perry asks him how he got there. Superman is surprised he didn't know. He flies off, still weakened by the waves. He then locates Jimmy at Pier 41, and saves Jimmy from being smashed. Superman, getting weaker, realizes that he was under some sort of spell, because he didn't know how he got their either. Blinky is watching through a telescope, seeing that Superman has a headache, and he's weakening fast.

Superman finally locates Lois, who is about to get smashed by a wrecking ball on the ledge. Superman swoops down and stops the ball from striking her, and tells her that he's weak because there are Kryptonite rays being transmitted via radio. He tells her he spotted a transmitter on a mountain and that's likely where they waves are coming from. He then starts ripping the lead off of the wrecking ball to use it to block the waves. Superman then flies into the transmitter's dish, smashing it with the shield. He then grabs Luthor and Blinky and tells them "It's back to the cage for you Luthor!"

Back at the Planet, Perry White tells the staff of the Daily Planet that the man who gave them the award was actually Luthor in disguise. Lois asked Clark where he was around noon, and he tells them he wasn't sure, but he had a major headache.

Retrieved from "https://superfriends.fandom.com/wiki/The_Deadly_Dish?oldid=84186"
Community content is available under CC-BY-SA unless otherwise noted.