The Chimp Who Made It Big 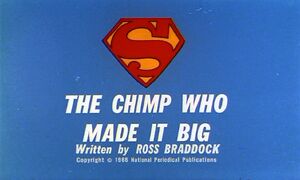 In outer space, a Venus space probe capsule is heading towards Earth's atmosphere. A meteor narrowly misses it as it flies by. But another meteor flies by, colliding with another (one is green, implying it might be Kryptonite), and this causes an explosion which sends out radiation that turns the capsule phosphorous, and causes it to turn end over end falling toward earth. Inside the capsule, is a frightened Chimpanzee named Toto, in the suit of an astronaut.

Meanwhile, at the Daily Planet, Clark Kent and Lois Lane are in Perry White's office. They had been following the reports from Venus Probe Headquarters. They are discussing the matter of the capsule, and how without control it will certainly burn up in the atmosphere. Lois is very upset about Toto, and she looks at a black and white photograph of Toto. Clark then slips out of Perry's office and changes into Superman in the supply room and flies out the window to save the capsule.

Upon leaving earth and heading into space, he flies through a large amount of meteors, and using super punches, he clears a path. He makes his way up to the capsule and grabs it, and takes it down with a controlled entry into the atmosphere.

Meanwhile, on the ground, in NASA's Venus Probe Headquarters, Lois Lane and her cameraman is covering the story for WKFA-TV. Lois reports that she can likely speak for all watching that they all hope that Toto is okay, and she goes on to refer to him as the "darling chimp" she's mentioned several times at the Daily Planet. Just then, the capsule starts to rock back in forth. Superman then uses his X-Ray vision to look inside. He then sees that Toto is increasing in size! He then busts out of the top of the capsule. Toto is now a gargantuan in size. Lois speculates that perhaps whatever happened in space did this to him. Toto begins stampeding around, he walks over to Lois Lane, and Superman tries to stop him but the giant ape fires Green Kryptonite energy blasts from his eyes, causing him to fall to the ground in pain. Superman is then able to deduce that it must have been a Kryptonite meteor that fused with another meteor which bombarded the chimp with radiation and turned him into a huge monster.

Meanwhile, the U.S. Army make an announcement for everyone to clear the area, and they fire missiles at the chimp, and Superman, who has recovered from the Kryptonite and regained his super strength, gets to his feet and flies up toward the missiles and shields the ape with his invulnerable body. Toto continues smashing around throughout the base. Superman tells the Army to hold their fire, but the Army Colonel tells Superman they are under orders to destroy it before it wrecks the base and likely ventures out into civilian territory. He asks for a little time, and they agree to give him five minutes. He then takes off in flight to an industrial area, where he finds some lead, which is the only known earthly substance that can shield him from the Kryptonite. He fashions the lead into a makeshift shield.

Meanwhile, the army are about to fire the rockets, but the colonel sees Superman is back is orders his men to hold their fire. The chimp blasts his Kryptonite rays but they cannot penetrate the lead shield. He then tells him he's going to give him a "ticket to the Land of Nod." Superman then conks Titano with the lead shield, rendering him unconscious. In doing so he drops Lois Lane, but she is grabbed by Superman. Superman tells Lois and the colonel that now that Titano is away from the Kryptonite meteors, the mutation will soon wear off.

Some time later on Main Street in Metropolis, a paper boy is trying to sell the latest headline, about how the attack, but Superman stopped him and helped revert Titano back to Toto. In Perry White's office at the Planet, Perry tells Lois she had a great scoop, but she tells him she wouldn't have been able to if it weren't for Superman. Just then Clark Kent walks into the office. Perry asks him where he'd been. And Lois told Clark it's probably good he didn't cover the story with her, otherwise he'd have been terrified. Clark then tells her: "You're probably right."

The title refers to the Chimpanzee, who is Toto. Making "It Big" refers to him turning into a colossal giant.

Retrieved from "https://superfriends.fandom.com/wiki/The_Chimp_Who_Made_It_Big?oldid=95075"
Community content is available under CC-BY-SA unless otherwise noted.