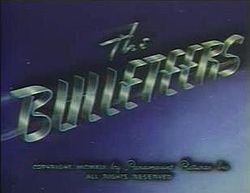 Previous Episode
Next Episode
The Arctic Giant
The Magnetic Telescope

Clock tower bells ring as police headquarters is attacked by a mysterious flying Bullet car, which crashes through a police headquarters and destroys it. Not long later, the Daily Planet's front page story reports the attack on police headquarters. There, at the Planet, Perry White tells Lois and Clark that he wants a follow up to the story, when just then, a loud voice can be heard over a microphone, coming from outside, from high on a hilltop. It's the same terrorists that attacked the station that now tell the citizens of Metropolis that they have only seen a small demonstration of their power, and that they promise that they will show more, to power plants, and municipal buildings unless the Mayor of Metropolis turns over the city treasury to them. The leader of the gang tells them that it's their last warning.

Later, at City Hall, Lois asks the Mayor what he's going to do about the terrorist's threats, to which he replies that he's not going to let some punks scare him into submission. He tells her law and order must prevail.

Meanwhile, on the streets of Metropolis, the National Guard and the police prepare for another attack from the Bulleteers, setting up a defense in case the Metropolis City Treasury is attacked. While, at the Daily Planet, Lois is writing the story that the mayor states that they will fight the Bulleteers in complete defiance of them. The leader of the Bulleteers reads the newspaper that Lois had wrote, and in anger he rips it up and throws it. He and the other two Bulleteers walk into another room in their lair, and the Bulleteers then board the Bullet car, and head towards the treasury. One of the police officers notice the Bullet car and shouts, "The Bulleteers!" The Bullet car then converts to airplane mode and flies up toward the sky, and the police open fire on it, with no effect. They target a Power plant, crashing into it and causing it to explode, and then causing much power to go out throughout the city.

At the Planet, the power has gone out, and the presses stopped. Lois runs out to her car and just as Clark is about to get in the car with her, she drives off, and he then says "This looks like a job for Superman!" He runs over to the phone booth and changes into the famous superhero. He then flies up into the sky and just as the Bullet car is about to strike the treasury, Superman uses his super strength to deflect the Bullet car with one super punch. The Bullet car is flying around out of control, the police continue firing at it, and the out-of-control bullet car just barely misses colliding with Lois Lane's car, which is buried in rubble that was tossed onto her car by the Bullet car. Superman swoops down and pulls all of the debris off of her car, and Lois is only dazed to mildly injured. Superman then flies over to the Bullet car and grabs a hold of the front of it, tugging and pulling on it to bring it down. The Bulleteer Leader manages to shake him off of the car, but he lands on his feet on a building and leaps back into flight after the car, and he lands on the treasury building which was directly in the path of the bullet car to stop it, but instead the bullet car smashes the building he's standing on, causing him to fall off of it, and in turn burying him in the entire building's rubble. Lois rushes over check out the scene. She climbs up a large piece of rubble that Superman is under, and crawls on top of it and looks down a giant hole and sees the Bullet car inside what's left of the building they smashed into. She sees that they are robbing the treasury and she sneaks inside the Bullet car while they are inside the broken safe. She takes a wrench and begins smashing the controls of the Bullet car, but the three Bulleteers return to the car, and she has to hide in the back. Superman then lifts the giant piece of rubble off of him. And Meanwhile, Lois is discovered in the car, and she tries to escape, but they pull her back inside the Bullet car and take off. Superman takes off after them, and destroys one of their wings, and they extract the wings, and Superman causes the car to spin, he then tears open a hole in the top of the car and pulls out Lois and the three Bulleteers and allows the Bullet car to crash to the ground.

Meanwhile, at the Planet, Lois wrote the story, which made the front page, saying that Superman destroyed the Bullet car. Clark tells her she made a great scoop, and Lois said it was easy, thanks to Superman.

Retrieved from "https://superfriends.fandom.com/wiki/The_Bulleteers?oldid=78357"
Community content is available under CC-BY-SA unless otherwise noted.