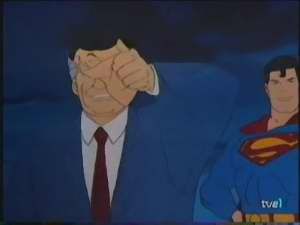 Dr. Glozer creates the Chronotron which is a device that lets someone look one hour into the future. Lex Luthor wants the machine and sends his men to kidnap Dr. Glozer and steal the machine. Looking through the Chronotron, Lex sees Clark turn into Superman. He arranges a train crash to force Clark to reveal that he is Superman, fortunately his plan fails. Lex then arranges a number of crimes to occur at the same times as disasters that appear in the Chronoton. Later Lex arranges to kidnap Clark Kent on live TV during a missile launch that Superman needs to stop. Lex wants Clark to reveal that he is Superman on live television, on the TV show "Metropolis Exposed." Fortunately, Superman arrives to stop the missile even though Clark remains on television. Lois destroys the Chronotron and it is revealed that the Clark Kent on television was really Jonathan Kent in disguise.

Overnight with the Scouts

Retrieved from "https://superfriends.fandom.com/wiki/The_Big_Scoop?oldid=53413"
Community content is available under CC-BY-SA unless otherwise noted.