The Beast Beneath These Streets 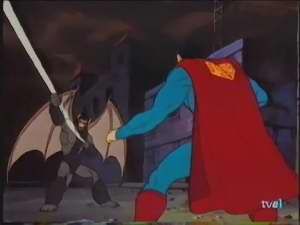 Researchers have discovered an old part of Metropolis that has been buried for a hundred years. This part of Metropolis came to be known as Old Town. According to legend, this part of Metropolis was buried a hundred years ago when a scientist named Doctor Morpheus made a machine that allowed him to steal the powers of a number of different kinds of animals. The legend turns out to be true when Morpheus who appears to be a man-bat kidnaps Lois. He lures Superman to his machine which he uses to steal Superman's powers. Using kryptonite, Superman weakens Morpheus and puts him into his machine. Superman's powers return and he immediately destroys Morpheus's machine trapping him inside it until the police arrive.

Retrieved from "https://superfriends.fandom.com/wiki/The_Beast_Beneath_These_Streets?oldid=53435"
Community content is available under CC-BY-SA unless otherwise noted.