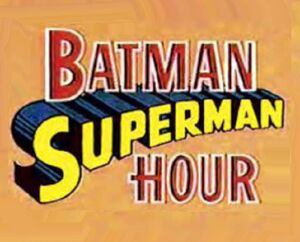 The Batman/Superman Hour was a Filmation animated series that was broadcast on CBS from 1968 to 1969.

This series marked the first animated Saturday morning cartoon for Batman, and his classic enemies. At the time the show was ordered by CBS, the live-action Batman TV show was at its ratings peak on ABC. Due to a licensing oversight on the part of the live-action show's producers, Filmation was able to secure the cartoon rights to Batman and produce the series for CBS.

This requiring Filmation to pull as many additional animators from other projects as they could spare to ramp up the new production.[?] According to Norm Prescott, six episodes of another series already sold to CBS — starring another DC Comics character, Metamorpho, aka the Element Man — had been completed and were ready to air, but the entire series had been shelved when CBS chose to rush The Batman/Superman Hour on its schedule.[?]

This series was the first time Olan Soule and Casey Kasem performed as the voices of Batman and Robin. Soule and Kasem would return several times to reprise their roles in The New Scooby-Doo Movies, Super Friends, The All-New Super Friends Hour, Challenge of the SuperFriends and The World’s Greatest Super Friends. Kasem would go on to voice Robin with Adam West as Batman in Superfriends: The Legendary Super Powers Show and The Super Powers Team: Galactic Guardians.

In 1969, instead of launching into a second season for The Batman/Superman Hour, the Batman episodes were repackaged into 30-minute episodes without the Superman segments and renamed Batman with Robin the Boy Wonder. It premiered on CBS on September 13, 1969. It was also known as The Adventures of Batman.

Batman Episodes:
The Batman half of The Batman/Superman Hour consisted of 34 stories:

In 1995 a short lived TV series entitled, The Superman/Batman Adventures aired on USA Network. It was later aired on Cartoon Network and Boomerang.

In 1985, Warner Home Video released five selected episodes of the series on VHS as part of the "Super Powers" video collection. These videos were re-released in 1996 and are out of print.

Retrieved from "https://superfriends.fandom.com/wiki/The_Batman/Superman_Hour?oldid=83712"
Community content is available under CC-BY-SA unless otherwise noted.