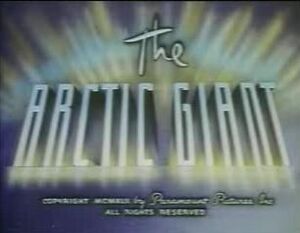 In Siberia, an archeological expedition searching for prehistoric fossils discover a large prehistoric monster, perfectly preserved in a state of suspended animation in the ice. It's as lifelike as it was millions of years ago when it roamed the earth in the Mesozoic age. The tireless workers of the expedition eventually find a way to remove the large monster from the ice, and they load him onto a special Refrigeration freighter, and transport him to North America, to the city of Metropolis, USA. Here, Alfred R. Ley donated this monster to be displayed at the Museum of Natural Science, where it is being held in a special refrigeration device.

At the Daily Planet, Perry White learns from a telephone conversation that if the ice at the exhibit were permitted to melt, then the monster may still be alive. He hangs up the phone and calls Lois Lane on his radio and tells her there's a new angle on the frozen monster story. He tells her to get over to the museum and see what's up. As she's leaving her office, Clark asks her if she'd like him to tag along. She tells him she'll be fine, and that if he did come along he'd probably faint at the sight of the monster since he scares so easily. As she leaves, Clark says, "Maybe she's right...but Superman hasn't fainted yet!"

Later, at the museum, a mechanic is showing Lois the machinery they use to keep the monster frozen in ice. He sets his oil can down beside the turbine, but the vibrations begin to shake the oil can, causing it to rattle dangerously closer to the edge. He tells Lois that the control board is downstairs. They walk down the stairs and he tells Lois that the entire plant is operated from this board, and that the thermometer has to be monitored constantly, as any rise in temperature could prove dangerous. Meanwhile, above, the oil can continues rattling until it falls over into the turbine. The noise alerts the mechanic and Lois, and the mechanic hurries back upstairs. Another mechanic yells out "Cut those switches!" and another mechanic does so, and immediately the begin working to try and get the machine operational again. Lois is excited and feels she hit the jackpot with this story. The thermometer begins rising as the temperature climbs. The ice starts to melt, and then the danger alarm goes off. The mechanics then speed up working, trying to fix it faster, but the ice continues to melt. Security begins to evacuate everyone outside. But Lois, emerging from the control room, hides beside a phone booth. Just then, one of the security guards gets into the phone booth and calls Police headquarters, and tells them to send a riot squad. The ice continues to melt, and and the monster is now starting to gain mobility. After the guard leaves the phone booth Lois enters it, and she makes a phone call to the Daily Planet, and just then, the monster is now free. It crashed through the roof of the museum and smashed through the wall. Just then outside the wrecked museum, the police open fire on the monster, but the bullets bounce off of it. The monster crushes their cars by stomping them, and then continues trampling his way through the city, destroying buildings and an elevated railway bridge. Panic is in the streets. The monster causes automobile collisions, and terror everywhere he goes, pretty soon the police are called and all cars respond to the situation, heading toward Fifth and Main. Meanwhile, at the Planet, Perry and Clark learn the news about the monster and Clark tells him Lois is over there, so he runs off and changes to Superman. He leaps over toward the museum and once he arrives, he saves the people by removing the rubble surrounding the building, and then he enters what's still standing of the building, and saves Lois by lifting a rafter that had trapped her in. He then takes her outside. He tells her to get back to the office where she'll be safe, and that he's got some work to do. Lois tells him "Yes sir." Superman then flies off. Then once Superman is gone, she says: "And miss the best story in years? Swell chance."

Elsewhere, the monster approaches a dam, and smashes his way through it, and it begins to flood the city. Superman pushes a large chunk of a hill onto the opening of the dam and seals the water in. The monster tips over boats as it walks through the river, and smashes its' way through a large suspension bridge. Superman flies down and catches the bridge and then uses the bridge's cables to repair the bridge temporarily by tying the bridge back upright. And at Metropolis Stadium, Lois arrives in a taxi cab. The monster draws closer to the stadium, and Superman uses some leftover cables to toss at the monster's legs which wrap around them and trip him, causing him to fall down and crushes several cars and buildings. Lois is standing one a balcony of the stadium and begins taking pictures of the monster but the monster grabs her with his mouth. She screams, and this alerts Superman, who instantly recognizes her scream. He flies into the creatures mouth, and using his super strength, he pries open the creatures' mouth and pulls Lois out to safety. He then tells her "This time, stay put!" to which Lois responds: "Yes m' lord!" Superman then strikes at the monster's neck, slams him onto the ground and bends a light pole and wraps it around his neck so that he can't move.

Later, the byline of the Daily Planet, written by Lois Lane says Superman Subdues Arctic Monster: Saves City From Destruction. The article explains that the monster is now being displayed at the Metropolis Park Zoo. Clark tells Lois that she showed a lot of courage getting the story on that monster. She then asks where he was. He said he probably must have fainted.

Retrieved from "https://superfriends.fandom.com/wiki/The_Arctic_Giant?oldid=68348"
Community content is available under CC-BY-SA unless otherwise noted.